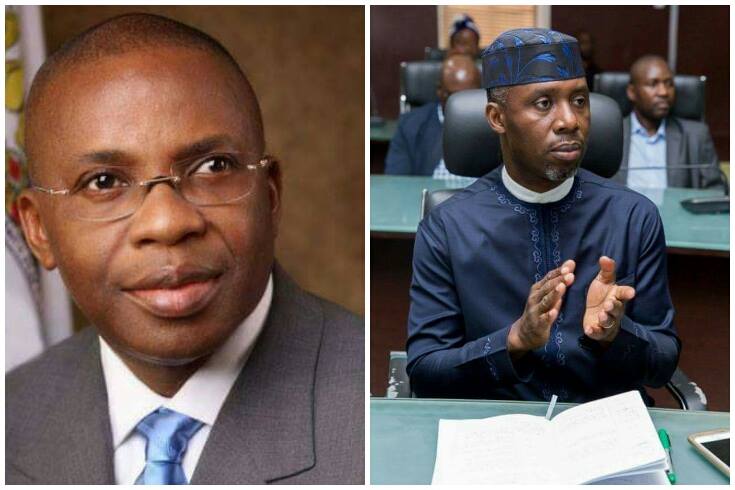 Reacting to Ohakim’s recent  open letter to Governor Okorocha, his Chief of Staff and Son In law, Uche Nwosu, said Ohakim who have unhindered access to Government House should have chosen to visit the governor privately and express his views.

The Chief of Staff in a statement said  “it is appalling and uncalled to imagine that a former Governor who has access Government House unhindered, who could have visited the incumbent privately to pinpoint his opinion on governance in the state would rather go public negating his status and reneging in his responsibilities to be an example”

I have read with consternation, the viral letter from the former Governor, Chief Ikedi Ohakim for the second time, to my Governor, His Excellency, Owelle (Dr.) Rochas Okorocha alluding unfounded, unverifiable and misleading information about the massive developmental projects ongoing in the state by the Rescue Mission Government.
There is absolutely nothing wrong with an indigene of the State writing letters to an incumbent Governor who is always ready to listen to his people but there is much to be desired when the content of such letters are made public.

The truth of the matter is that, we have been receiving opinionated letters from even the opposition members like Senator Hope Uzodinma of the PDP but nobody gets to hear about since the intention is to address the governor on issues the Senator feels should be addressed and I make bold to say that, such letters receive adequate attention of the governor and the and issues raised had always seen the light of day.

Therefore, it is appalling and absolutely uncalled for to imagine that a former Governor who has access to Government House unhindered, who could have visited the incumbent privately to pinpoint his opinion on governance in the state would rather go public negating his status and reneging in his responsibilities to be an example.

I am particularly unhappy that those, who naturally, could not stand face to face with the former Governor are taking advantage to insult him, and I repeat, I frown at it. Those doing so, should desist. It is not in our culture to cast aspersions on the elderly. I urge you all to discontinue.

Finally, Chief Ikedi Ohakim should have the assurances that Owelle (Dr.) Rochas Okorocha is ready and willing to listen to him or any other leader, Statesman, citizen, groups or individuals at all times, who have meaningful contributions towards the development of our State.

DROPPING HAS BEEN CHIEF EMEKA IHEDIOHA’S WEAPON IN POLITICS
-HE CAN’T WIN COUNCILLORSHIP ELECTION IN HIS WARD TOADY
-THOSE OF THEM IN PDP ARE WORRIED ABOUT THE HUMILIATION THEY ARE GOING TO FACE IN 2019.

The Imo State Governor Owelle Rochas Okorocha has read the lengthy interview granted to SATURDAY SUN of April 8, 2017 by the Former Deputy Speaker of the House of Representatives, Chief Emeka Ihedioha, and in which he also told his usual stories and insulted the governor.

In less than four weeks, Chief Ihedioha had granted three interviews all on Governor Okorocha and in each of the interviews, he skipped talking about the twelve years his party, PDP, governed the state and the twelve years he spent in the House of Representatives because he knew they were all abysmal.

In the latest interview, Chief Ihedioha talked about Governor Okorocha’s style of governance in the state and how he was robbed in the 2015 guber election and so on. In all the interviews, he was very painstaking not to accuse Governor Okorocha of non-performance.

Again, we have also decided not to be reacting to Chief Ihedioha’s constant media attacks on Governor Okorocha because we have discovered that they do all these to give outsiders the erroneous impression that they are still relevant in Imo politics, when in actual fact, they have all gone into political oblivion.

The fact is that Chief Ihedioha sustained his growth in politics from 2003 to 2015 through name-dropping and that ugly development ended in 2015, and today, he does not have any other name to drop. And if he runs for councillorship in his ward today, he will fail woefully.

In 2003, he dropped the name of Atiku Abubakar to grab the ticket of the party and then went to the House of Representatives. He also continued to drop the name of Goodluck Jonathan until that gimmick was forced to stop in 2015.

When he took the ticket of the PDP for the 2015 guber election, everybody knew that the party had denied itself the needed impact it would have made in that election, and not to talk about winning the election proper. At the end of the election, he could only have the three Local Governments of Mbaise where he comes from, out of the 27 LGAs in the state.

He is a brief-case politician and Imo people always have reservations for such politicians. He is disconnected from the people unlike Okorocha who is glued to the people. They are two different scenarios. Let him state what he did for his Mbutu ward, his Federal Constituency and Imo people in general for the twelve years he was in the House of Representatives and ended up as the Deputy Speaker of that House.

Let him also state what the PDP governments achieved for the twelve years they governed the state. They don’t talk about those things because they know that those years were wasted. They should find a way of connecting themselves to the people because media interviews do not vote in elections.

Rochas Okorocha has shocked all and sundry with the amazing achievements of his administration. He can confidently boast of more than one thousand verifiable projects. And we have always sounded boisterous that what the Okorocha administration has achieved in less than 6years, have exceeded by far, all that the past administrations in the state had achieved put together.

We have always asked anybody who feels otherwise to challenge us on this claim. And nobody has ever done that because they know that the projects are there to be seen. And their media engagements were aimed at watering down the enormous achievements of Rochas Okorocha in Imo.

And for 2019, Rochas and APC will brandish enormous achievements of the Rescue Mission Government in the state to the electorate, and the PDP will be left stranded because the ugly shadow of their twelve years’ governorship in the state would continue to chase them.

Chief Press Secretary to the Governor