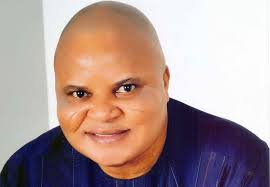 A fierce war came to the fore weekend when some APC loyalists belonging to the camp Senator Ifeanyi Araraume attacked an aide of the Imo State Governor.

Online reports verified by this newspaper reveal that fracas broke out at Umuelemai, the headquaters of Isiala Mbano Local Government Area when a  loyalist of Okorocha,Hon Simeon Iwunze,who was supposed to be on road monitoring in the area suddenly made a detour and went to the headquarters of the local government to announce a change in the leadership of the party in the area.

Iwunze, a former lawmaker was said to have been attacked by Araraume’s loyalists who stormed the council and unleashed terror to express their resentment to the move.As the senator’s supporters chanted irate songs, the lawmaker took to his heels and was nowhere to be found.

Senator Araraume is a serial governorship aspirant in Imo State having vied for the seat in three different political parties, twice in the Peoples Democratic Party, PDP in 2006 and 2015 where he won the Governorship Primary of the party.  And twice, he was denied the party governorship ticket in controversial circumstances.

In 2011, he contested under the paltform of the Action Congress of Nigeria, ACN, and placed a distant third in the governorship polls after Ikedi Ohakim (PDP) and the eventual winner, Rochas Okorocha, then governorship candidate  of the All Progressive Grand Alliance,APGA.

The senator who enjoys tremendous followership and strong political base is speculated to be eying the governorship seat again in 2019.  He aided the incumbent Governor, Rochas Okorocha to win the 2015 polls.

Okorocha is expected to leave as governor of the state in 2019 at the expiration of his second tenure spanning eight years. He is yet to announce his successor though reports are widespread in Owerri that he may anoint his Chief of Staff and son- In law, Uche Nwosu for the position.

A former member of the House of Representatives, Hon. Uche Onyeagocha had told journalists in Owerri that the governor is scheming to have Nwosu take over from him, a major factor why he is sponsoring a group called the UGWUMBA MOVEMENT to oil the aspiration of his son in law.

He said the attempt will be resisted by the people of Owerri Zone- which is yet to produce the state governor after Evan Enweremm governed the state for a meagre 22 months.