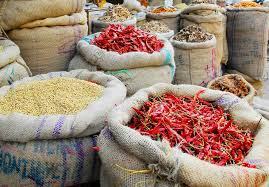 The National Bureau of Statistics, NBS has said prices of food items in the country has decreased by 7.22 percent.

This was revealed by the National Bureau of Statistics, NBS in its latest report.

The Bureau said between April 2016 and 2017, the average cost of 1 kg of rice (imported high quality sold ) increased by 29.98 percent in the month under review.

Before Political Tension Heightens In Imo

innonews - January 13, 2019 0
Barely a month to the Presidential and National Assembly elections and less than 50 days to the governorship polls, the political...

innonews - December 20, 2017 0
Nigerian Senators on Wednesday rose against the detention of the founder of Innoson, Nnewi based  industrialist Innocent Chukwuma. "Every small thing, EFCC. Tommorow, if a...

innonews - September 2, 2018 0
The Director General of Voice of Nigeria (VON), Mr Osita Okechukwu, has said that the Muhammadu Buhari administration will award the contract for Eastern...