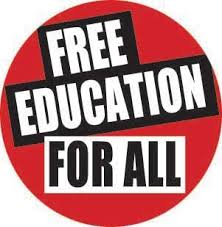 Governor Okorocha had given the figure of School enrolment in the State at the moment when he demanded the figure from the Commissioner for Education, Mrs. Getrude Oduka while making his speech at the newly built Owerri City Primary School, where he personally marched about three thousand pupils from their old Congested Owerri Township College to the newly built Owerri City Primary School, with the aim of decongesting the old School.

The governor said “I’m not here to commission this project but I’m here to welcome the future generation of Ndi Imo to their new School and would like to state categorically here that watching this children today, I can then say to ourselves that we all have made mistakes during our time, but we must never allow these children to make the same mistakes”.

He further added “I think that is one commodity that every child must have and every child is entitled to, despite the economic situation we face in our nation. It is of a truth that we have placed so much emphasis on education and we have built several Schools. Our School population has grown in such a geometric progression, but I’m not satisfied yet. I will only be satisfied when every child in Imo State has access to free and qualitative education”

His words, “This is the new Imo State I dream of ladies and gentlemen. I have welcomed these children to this School. The idea is to make their School environment much better than their former environment, so that they will be attracted to come to School, and will be eager to come to School. So we must do all we can to make their environment a better one. This is one industry we must protect. This is one aspect of our economic life that we must defend”.

In his speech at the event, the majority leader in the State House of Assembly, who is also representing Owerri Municipal Council in the Assembly, Hon. Lugard Osuji said he was happy that Governor Okorocha unlike his predecessors has never acquired any land of Owerri people for his personal use, but only for development, adding that it is only under Governor Okorocha’s government that Owerri Municipal could rightly be described as a State Capital.

Hon. Osuji reiterated that with the massive development Owerri Municipal has seen under Governor Okorocha, the indigenes of the area would remain grateful to him and would never forget his administration in a hurry.

Commissioner for Education in the State, Mrs. Oduka said there is an explosion in School enrolment in the State because of the free education programme of the government, adding that history and Posterity would be fair to Governor Okorocha for this revolution in the education sector in the State.

innonews - October 5, 2018 0
The Governorship Primary of the All Progressive Grand Alliance, APGA in Imo State has been postponed to Saturday, October 6, 2018 Late arrival of materials...

innonews - March 6, 2018 0
The Peoples Democratic Party, PDP in Imo State and Destiny Organization of Senator Ifeanyi Araraume have reacted strongly to the assault on the Catholic...