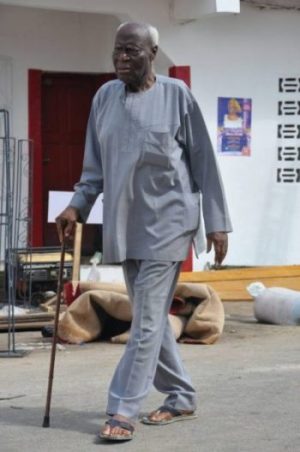 The sun set in the early hours of Monday, May 29, 2017, for Chief Nathaniel Uzodinma Onyeukwu, veteran journalist, former Chief Public Relations Officer of the Nigerian Ports Authority and one of the leading lights of the Imo State Elders Council, bringing to a glorious end, an eventful life of one Nigeria’s respected elder statesmen.
He was aged 85 years

Mostly remembered for his fiery and courageous dispositions, he was a relentless defender of the rights of his native homeland of Owere Nchi Ise, the Imo State capital, which earned him both the admiration and respect of the people.
He was installed the Ikemba Owere by the Late Eze Alexius Anumaku Njemanze, Ozuruigbo IV of Owere. He later served creditably as the Secretary General of the Eze Owere Cabinet.

In May last year, he lost his priceless jewel, Elect Lady (Lolo) Catherine Nnenna Onyeukwu, who was buried in Owerri on July 2, 2016, which attracted society’s high and mighty, notably the Minister of Science and Technology, Dr. Ogbonnaya Onu and the Imo State Governor, Owelle Rochas Okorocha and other bigwigs drawn from various strata of the society.

A politician of noble hue, he was a one time Director of Public Affairs of the Late Umaru Shinkafi Presidential Campaign Organization. He was a bosom friend of the former Nigeria’s Spy Chief, a relationship that spanned over two decades.

He is survived by six children, fourteen grandchildren and a son in law.His remains will be laid to rest at a date to be announced by the family.

innonews - February 18, 2018 0
Senator Ifeanyi Araraume, a governorship aspirant on the platform of the All Progressive Congress, APC has taken his aspiration to Orluzurumee, the apex socio...

innonews - April 25, 2019 0
*BY IKENNA ORIOHA* The newly re elected leadership of the Nigeria Labour Congress, NLC in Imo State...