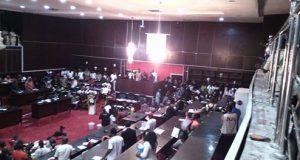 Imo State Commissioner for Community Government Council, Hon Innocent Eke has incurred the wrath of the State House of Assembly.

Eke is at cross roads with the lawmakers for failing to appear before the House on allegations leveled against him in connection with the creation of autonomous communities in the state.

The lawmakers lost their cool after the Speaker, Hon Acho Ihim read a letter from Eke saying he would have to speak with the State governor before appearing before the House.

Ozuruigbo said the letter is very disheartening and uncalled for, while Osuji vowed that the Commissioner will be taught  lesson of his life as the letter was written in bad faith.

He said the letter was written with the intent to bring the legislature and the executive to collision.