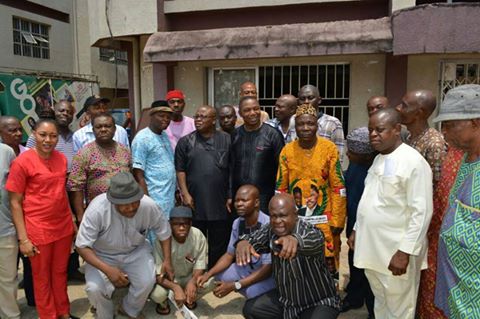 He was engaged in a fierce war for the governorship ticket of the party which he eventually lost to former Minister of Interior, Capt Emmanuel Iheanacho.

Iheanacho posted a dismal performance at the 2015 polls

Okey Ezeh has not announced his renewed ambition to contest again in 2019 but he has showed body signs to do so following his eloquent rendition of the economic problems affecting the State in recent times.

Recently, he hosted the local government chairmen of the All Progressive Grand Alliance (APGA) at the Imo State chapter of the party. He took his message of hope to them and assured that better days were near.

Reports said he held fruitful discussions with the party chairmen where they cross pollinated ideas that would lead to the growth and development of the state.

The Chairmen who took turns to thank Mr. Ezeh commended for his commitment, dedication and undying passion for the state simplicity and humility.

Indications were rife that Ezeh is battle ready for the 2019 governorship contest having embarked on consultations with various segment of the Imo society.

innonews - September 25, 2017 0
Owerri indigenes have not rested on their oars over the demolition of their ancestral Eke Ukwu market by the Imo State government. The people have...

innonews - July 11, 2021 0
The All Progressive Congress, APC says dates for its Congresses remain unchanged, just as it expressed shock over its leaked Letter to...

Uche Nwosu: I Will Be Victorious On Saturday.