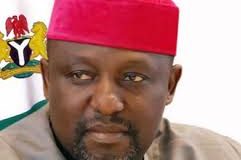 The Commander 34 FAB Obinze, Imo State, Brigadier General Kay Ishiaku has been redeployed out of the State with Governor Rochas Okorocha describing him as an officer on a rescue mission to Imo State over the onslaught against Imo people by his predecessor during the 2015 elections in the State.

According to a statement issued by the Governor’s Chief Press Secretary, Sam Onwuemedo, Governor Okorocha spoke at Valedictory session organized by the State Government in honour of General Ishiaku, stating that the people of the State were terrorized by the army in the State under the Command of Brigadier-General Ishiaku’s predecessor and that the people were under such condition when General Isiyaku took over and rescued them, and the normal relationship between the people of the State and the army was restored.

Governor Okorocha remarked “Today is rather a day of mixed feelings for someone we have come to love and appreciated so much. He made himself so approachable that we forgot that he is a general and we see him as one of us”.

The governor said “the story of democracy in Imo State cannot be complete without General Ishiaku because in 2015 it was obvious that we were derailing somehow from the political equation but he stood his ground to do what is right, fair and just. Ishiaku has played a very key role in guaranteeing security in this State. Ohaji/Egbema and Oguta story cannot be told without Brigadier General Ishiaku. Today Imo State is free from kidnapping and criminal activities, Ishiaku played a key role”.

He advised him not to change in his professional attitude, pointing out that the sky will be his limit and announced the gifts of a piece of land in the choicest area of the State, Five million naira for transportation and Two million from the Cross River State governor for General Ishiaku”.

For the new Commander, Brigadier-General H.I. Bature, the governor tasked him to “improve on what his predecessor did”, adding that what he must know about the government is that it does not use the police or army for anything illegal and it will never ask you to do anything unconstitutional, but the right thing and make sure you serve your fatherland well in Imo State which is your Constitutional responsibility. “Here, fear of God is our watch-word”.

Prof. Ben Ayade, the Cross River State governor in his speech described the Imo State governor as a “man full of confidence, sagacity, capacity, flexibility, elegance, confidence, and intelligence. I want to tell you the great people of Imo State that you have a rare opportunity to have an enigma, a man of great intellectual capacity that has led Imo State to an enviable height perhaps that explains why even as a governor from Cross River State and of the PDP extraction, I find him so admirable, he has so much capacity that has endeared him to many”.

In his own speech, General Ishiaku said “I have never had it so good in my carrier. My success is as a result of the co-operation given to me by the governor. I could go to him any time knowing he is willing to help out”.

He thanked the governor for what he did for his brigade especially in the area of renovation of their structures and asked that the same co-operation be given to his successor.