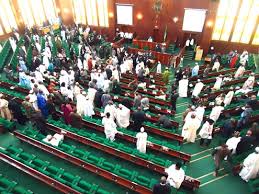 The Peoples Democratic Party, PDP has lost another member of the House of Representatives from Plateau State, Edward Pwajok.

He defected to the governing All Progressive Congress, APC Wednesday.

His letter of defection was read by the Speaker of the House of Representatives, Yakubu Dogara onn the floor of the House.

The lawmaker said his defection to the APC was based on the division of his former party, the PDP.

In a twist, the minority leader of the House, kicked against Pwajik’s defection saying there is no division in the PDP as

Ali Sherrif is the National Chairman of the PDP.

Plateau State Governor, Solomon Lalong was the floor of the House to receive the lawmaker.