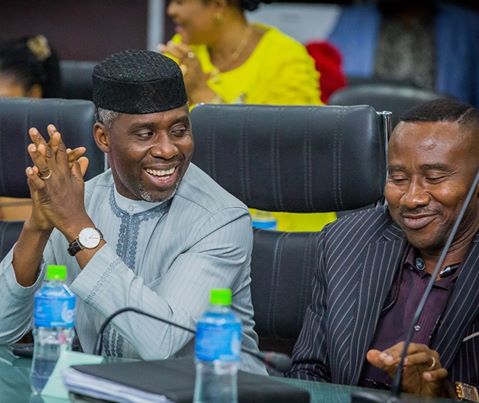 This newspaper was reliably informed that the Governor’s think tank is considering the Secretary to the State Government, George Eche and his son-in law and Chief of Staff, Uche Nwosu for Governor and Deputy Governorship position in 2019.

Nwosu has been in the public spotlight recently thus fueling speculations that he is the anointed choice for the 2019 APC governorship ticket.

Verified sources however whispered to this newspaper that the game plan may change considering the pressure the Governor has come under since news filtered into the public domain that Nwosu is his anointed choice for 2019 Imo governorship. A local tabloid concurred this story last week when it reported that Okorocha is under pressure to drop his son- in law for the state governorship.

The pressure was said to have come from many quarters’ mainly top APC stalwarts within and outside the State who contend that Nwosu’s guber bid has so many political baggages. This has also generated so much concern within the Governor’s camp as many of them contend that the reaction may be a clear indication that Nwosu’s ambition may be a hard-sell considering the rising unpopularity of Okorocha among the vast majority of the Imo electorate.

A source said ” though there is a feeling that the government has done so much to build infrastructure, we wonder why there is so much resentment among the people. This is not just about the opposition infiltrating the public and feed them with non existent tales about the government. We are deeply worried that there is no sufficient greenlight from the populace. May with time the electorate will see our good plans”

However, this newspaper was told that Nwosu’s ambition has been critically analyzed by the Governor’s think tank and the feed back has not been very favourable. This was said to have paved the way for the suggestion of an Eche/Nwosu ticket.

It is unknown if Okorocha has consented to the plan as another  source said there is still more time for further consultations on the issue of succession as some close associates of the Governor  are aware of the negative perception an Uche Nwosu ticket may generate and it is therefore important that there is a review of the plan in view of the rising and growing opposition from powerful political forces in the state and the non favourable perception about an Okorocha in- law taking over from Okorocha himself.

A school of thought within the governor’s camp reason other wise insisting that Nwosu is the best to take over. However, the cards remain open as nothing is definite yet.

The Governor is expected to announce his cabinet very soon. A local newspaper in Owerri reported that those jostling for one position or the other have invaded the office of Nwosu seeking for appointments and pledging their loyalty to whatever succession plan the governor has in mind.

With growing resentment from Owerri zone, who insist that it is their turn to produce the next governor of the state, there are feelers that some top politicians from the zone have been assured of plum positions and will serve as foot-soldiers in the zone and woo the gullible politicians to a Nwosu guber bid.

With a year or so left to 2019, the dynamics and perception of an Okorocha in- law in Government House, Owerri, may just feul a reconsideration of plans which inner Government House sources said will be ideal for Eche to take the plum job, while Nwosu deputizes