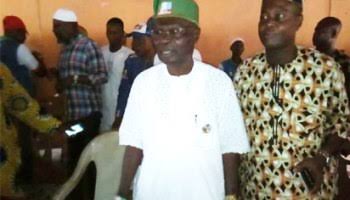 He was a chieftain of the All Progressive Congress, APC.

He was aged 57 and hailed from Delta State. He passed away after his vehicle was swept into drainage after a torrential rainfall.

An eye witness said the APC chief lost control as flood waters swept him and his car. His remains were immediately recovered and deposited at the Kubawa General Hospital morgue.

The APC national secretariat has issued a statement on the untimely demise of the Delta State APC chieftain.

In a statement Thursday  by the party’s National Publicity Secretary, Bolaji Abdullahi, the APC recalled that the late Akamukali served as member of the Presidential Campaign Committee that worked for the successful election of President Muhammadu Buhari in 2015.

innonews - March 18, 2021 0
BY RALPH EJIMKONYE A watchdog, the Imo Awareness Coalition, IAC, has described as shameful and worrisome, the rating of...

innonews - March 9, 2018 0
Troubled English Premier League side, Arsenal FC, shamed their critics on Thursday night as they secured a 2-0 win over AC Milan at San...

innonews - May 25, 2020 0
More than 30 aspirants are jostling for Okigwe Senate seat on the platform of the All Progressive Congress, APC, Imo State chapter.

Aftermath Of S/Court Verdict: Uzodinma Tells Opponents What To Do, Reveals...

innonews - March 4, 2020 0
Basking on the euphoria of his victory at the Supreme Court, Imo State Governor, Hope Uzodinma has advised his political opponents to...