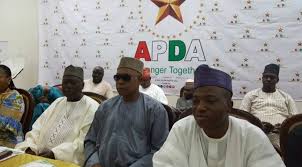 The polarization of the PDP at the centre had further raised fears among some party members in Imo State who suspect that they will be politically hurt in the event the Supreme Court judgment  favours the Ali Modu Sherrif faction of the PDP.

No notable Imo PDP stakeholder was sighted at the inauguration of the APDA which took place in Abuja Tuesday but this newspaper was informed that some of their footsoldiers and aides sneaked into Abuja to parley with leaders of the new party.

One of the promoters of the APDA, Dan Nwanyanwu, is from Ikeduru Local Government Area of Imo State. He was a former National Chairman of the Labour party. During the 2011 presidential election, the Labour Party had no presidential candidate as it backed the PDP candidate, then President Goodluck Jonathan.

The Ahmed Makarfi faction of the PDP which many of the key stakeholders in Imo PDP belong to had issued a statement yesterday distancing themselves from the formation of the APDA.

This newspaper had reported that there is discontent, fear and panic among pro Makarfi PDP supporters in Imo State despite repeated assurances from party leaders that all will be well after the Supreme Court Judgment.

Tambuwal is of the governing All Progressive Congress, APC.

Though both are known to be friends right from their days as Speaker and Deputy Speaker of the House of Representatives, many suspect that there is more than meets the eye when Ihedioha visited Sokoto State to commission projects for Tambuwal.

Ihedioha is a major pillar of the Pro Makarfi faction in Imo State and his visit to the sultanae which was widely reported further prompted some PDP stalwarts in Imo to create “alternative political options” in the event the Supreme Court judgment on the leadership tussle in PDP go Sherrif’s way.

innonews - September 20, 2017 0
In what appears a veiled exhibition to seek for the endorsement of Governor Rochas Okorocha for the 2019 Imo governorship, two principal officers in...

innonews - October 12, 2018 0
*By DESTINY Isinwa* The management of Federal Polytechnic Nekede Owerri, Imo State have inaugurated the new leadership of Students' Union Government(SUG) in the institution. The previous...