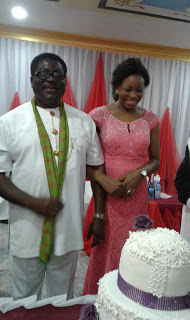 Imo State Deputy Governor, Prince Eze Madumere Sunday treated friends and well wishers at his mansion  including faithful of the All Progressive Congress, APC to a lavish wedding and Thanksgiving reception for his new wife,  former Princess Chioma Onyekaba

She hails from Isuakwato local government area in Abia State where a quite traditional wedding was earlier held.

Reports said this is the third time the Deputy Governor is taking a wife.He had married his first wife who reportedly gave him a son and later got entangled with Barr Adaego Nosiri.

The marriage was said not be a success which led to the third marriage to Princess Chioma.

Madumere Sunday evening posted on his facebook page saying “Today, we had a glorious thanksgiving in appreciation of God’s manifold Grace upon me, my wife and children. “Amazing Grace will remain a sweet melodious songs in mouth. I will continually praise Him because it is only in Him that I can seek refuge. My lovely wife, Princess Chioma Rosemary Madumere joined me to praise His name for bringing us together as one. His amazing grace surely will see us through. My journey of life has not been such a rosy one. Challenges have always come but He that dwelleth in secret place of The Most High shall abide under the shadow of the Almighty. His has been sufficient for us. For those who showed up, on behalf of my family, I say thank you for coming to rejoice with us”

He was silent on his reported previous marriages.

Ihedioha: Supreme Court Verdict, A Step Towards Returning Power To The...

innonews - July 22, 2021 0
The Peoples Democratic Party, PDP, in Imo State, has said it is still pursing a matter against Governor Hope Uzodimma at the...

innonews - July 7, 2020 0
Outdoor advertising practitioners in Imo have called on the state government to harmonize fees and taxes for bill board placements to ensure...