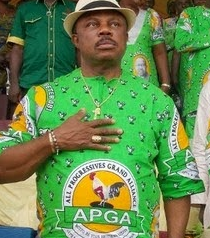 Anambra State Governor, Willie Obiano, has said he has no reason whatsoever to quit the All Progressive Grand Alliance, APGA for another political party.

In apparent reaction to a report that the 21 local Government Chairmen in Anambra state held at his instance advised him  to quit the party following a court order that stated that Martin Agbaso should be the national chairman of the party, Obiano said the report is false.

In a statement by his media aide, Oliver Okpala, he said there was no truth in the rumour, saying the report emanated from the opposition, who he said were eager to distract the governor from his good works in the state.

Okpala said Obiano remains a strong card carrying member of APGA and also remains the Chairman of the party’s Board of Trustees and leader of the party.

He said Obiano never contemplated leaving APGA for any other party and stands on his unshakeable commitment to seeking re- election as Governor under the platform of his party- APGA.