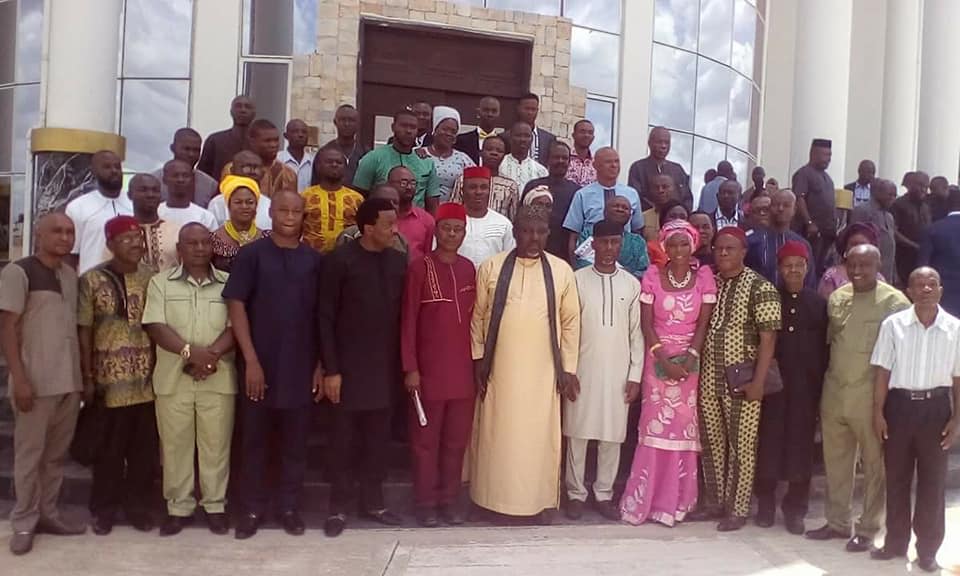 With the political dynamics in Imo State fast emerging despite two years to the next election, Imo State Governor, Rochas Okorocha, Friday played host to a group from Mbaise nation under the aegis of Mbaise Frontline Academia at Government House, Owerri

Details of the structure and formation of the group was sketchy as at press time. Though the motive of the visit was not political in outlook, but bore the finger prints of political undertones judging from the Governor’s response after the leader of the group spoke.

Led by one Prof Ekennia C.C.,the group was also thankful to the governor for the free education programme and total transformation of Imo State to a modern state and also assured of their loyalty and support.

The Governor responded in the affirmative eulogizing the Mbaise spirit of industry, creativity and brotherliness, adding that “ the Mbaise bloc is an indispensable bloc to any politician”

Findings by this newspaper show that the group has no political colouration as its name indicates that it is made up more of academicians than politicians.

But analysts contend that the reach out by the governor to some Mbaise professionals early enough is to soften the ground for the electoral battle in 2019.

Okorocha lost votes in the 2015 governorship election in the Mbaise nation as the area was swept by the PDP governorship candidate, Emeka Ihedioha.

Okorocha seems to understand the political importance of Mbaise nation when he told the visiting delegation that he did not enough votes from Mbaise people in 2015, saying they were deceived by the propanganda of “ Who is your own”

But the question remain if voters in the area have changed after the 2015 elections.

Ihedioha is still rumoured to be staging a come back to the contest and will surely ride on the strength of Owerri clamour for the next governor to drive his ambition. The massive support he enjoyed from his Mbaise kinsmen may not wane in 2019 but could possibly snowball into other blocs in the zone.

But pro Okorocha supporters argue that he has done enough for the Mbaise nation to earn a change of mind from the people.

There is the argument that some of the projects Okorocha embarked on in the area such as  the construction of a brand new university campus in Ogbor-Uvuru Mbaise, the construction of 45 kilometres road in the three LGAS of Ezinihitte, Aboh, and Ahiazu Mbaise, the resuscitation of the Skyrun industries are eloquent testimony of the governor’s  commitment to the growth and development of Mbaise clan.

Ihedioha Opens Up: Imo, How I Met It Six Months Ago

innonews - November 25, 2019 0
Imo State Governor, Hon.Emeka Ihedioha, CON Sunday, opened up on the state of Imo before he was elected Governor, just as...

innonews - September 6, 2018 0
There is an ongoing cold war in the Imo State chapter of the Peoples Democratic Party, PDP over the forthcoming delegates election. This has led...

innonews - December 12, 2018 0
The Popular Nigerian actor, Emeka Ike shares cute photo of his grown up daughter Oluwakemi Adanna Ike as they posed together.