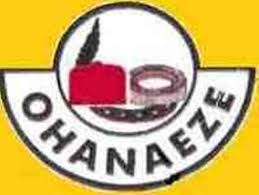 Ohaneze Ndi Igbo, the pan Igbo socio cultural group, at the weekend,  set up a 100 man Planning and Strategy Committee and also decried the inability of the nation’s security agencies to arrest Arewa Youths involved in the quit notice on Igbos resident in the North.

Nwodo who spoke in Enugu while inaugurating the committee headed by former Central Bank of Nigeria (CBN) Governor, Chukwuma Soludo, gave kudos to various groups that condemned the ultimatum given to Igbos in the North.

He expressed worry why the nation’s security agencies were foot dragging in carrying the arrest of those who issued the threat.

The Ohaneze Leader said, “quite recently, we have witnessed very provoking and unpatriotic remarks from Arewa Youths. Their remarks have grown from whispers to a national quit notice to Igbos to leave Northern Nigeria”

While he applauded the immediate and unequivocal condemnation of the utterances of the Arewa youths by the Governor of Kaduna State, the Northern Governors Forum, the Middle Belt Forum and the rather mild equivocal condemnation from the Arewa Consultative Forum,  the continued threat by the Youths and daring the Police to arrest them and the support offered them by splinter elements of the Northern Elders Forum  all point to a swell of reasonable support from a section of Northern Nigeria.

He said what is worrisome is the incapability of the Police to make needful arrests which points to double standards on the part of the security agencies, adding that “ Arewa Youths could be acting out a plan that may spiral out of control”

Nwodo said “Why have disclosures that some soldiers are talking with politicians not led to any arrest? Why have none of the Arewa Youths been arrested in spite of the orders of the Inspector General of Police and the Chief Security Officer of Kaduna State, Mallam Nasir El-Rufai?

“If our security forces, formally in command and control by mainly officers of Northern Nigria fail to carry out lawful and needful arrests of criminals amongst Arewa Youths or coup plotters in the army and their civilian collaborators, how can we expect them to heed the orders of the Acting President to protect our people in the North?”

Based on the socio political challenges facing Igbos, the Ohaneze President tasked the committee to co- ordinate efforts that could lead to an integrated railway network linking all seven Ohaneze States  in addition to an annual growth of one million palm trees in each of the seven Ohaneze states within the next five years.

He said  “A corresponding growth of attractive processing industries for the palm produce but on high, medium and small scale levels;

“A policy for maximization of our coal resources for power generation and a geological inventory of all our mineral resources and carefully scripted plan for engaging the federal government in their exploitation”, among others.

In his response on behalf of the committee, Soludo promised total commitment of the members, saying a time “like this calls for big, bold thinking, active networking and collaboration”