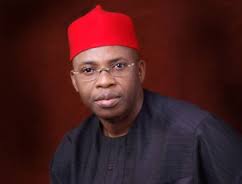 Ohakim had announced his exit from the PDP last year saying he has quit politics in order to face a new vocation- mentoring the youths.

Since then, he has played the role of an elder statesman having delivered a lecture in honour of Late literary writer, Chinua Achebe. He had also visited the leader of the Indigenous People of Biafra, IPOB, Mazi Nnamdi Kanu.

Later on, he hosted the President General of Ohaneze Ndi Igbo, John Nwodo at his Burma Retreat residence.

What raised speculations on his move to the APC was a post on his facebook account Thursday evening where he posted the manifesto of the governing party.

He did not state in his post if he is joining the party or not. Several interpretations have been given to the post. A school of thought said Ohakim may have posted part of the APC manifesto to remind the party of its promises to Nigerians con

Nigeria which was Africa’s hope and pool of human resources, a rising star and role model at independence has suffered and endured outrageous shocks and tribulations over five decades and lost her place on global stage.

Today we are faced with tragic incapacity to feed ourselves, support our institutions, produce electricity, provide health facilities and educate our children. We have lost our capacity to provide security of life and property for our citizenry. We have become weak, fragile, totally import dependent and unable to provide jobs, housing and basic necessities of life for our people.

Democracy, to be stable and meaningful, must be anchored on the principle that government derives its powers from the consent of the governed. This is the ideal of All Progressives Congress (APC).

This means that governments are instituted on the basis of free, fair and credible elections, and are maintained through responsiveness to public opinion. In addition, the exercise of political authority is rooted in the rule of law. APC believes in the doctrine of social contract between the leaders and the led; which means that the public office holder is a trustee of the people and that power must be used in the interest of the people rather than in the interest of the public office holder.

Our mission is to construct and institute a progressive state anchored on social democracy, where the welfare and security of the citizenry is paramount.

As progressives, we believe that Nigeria is greater than any individual or the sum of her Federating Units, therefore the country can only succeed when all of us have equal rights, where no one is above the law, where the culture of impunity is abolished and where there is level playing field.

Those compatriots who have lost faith in our dear country because of insufficient and corrupt leadership; count on us for we represent an Agent of change for committed, transparent and focused leadership.

As a change Agent, APC intend to cleanse our closet to halt the dangerous drift of Nigeria to a failed state; with a conscious plan for post-oil-economy in Nigeria.

To achieve this laudable programme APC government shall restructure the country, devolve power to the units, with the best practices of federalism and eliminate unintended paralysis of the center.

In sum, we subscribe to and shall preserve the fundamental objectives and directive principles of state policy as enshrined in chapter two of the 1999 constitution of the federal republic of Nigeria as amended.

And without any intention to abandon any ideal which will guarantee the corporate welfare and security of our people. We specifically offer these 7 (seven) cardinal programmes:- (WBA-IFD) to the Nigeria populace.

innonews - June 14, 2018 0
As the national convention of the All Progressive Congress draws near, the local Government Chairmen of the party elected at the party’s LGA congresses...

innonews - August 25, 2017 0
Barcelona have secured the services of Ousmane Dembele who is seen as a direct replacement for Brazilian Neymar. Neymar left Barca for PSG in a...

Njemanze Reveals Where Human Intelligence Is Located In The Brain

innonews - January 1, 2022 0
A neurologist, Prof (Dr) Philip Njemanze, has revealed where human intelligence is located in the brain. He said this...