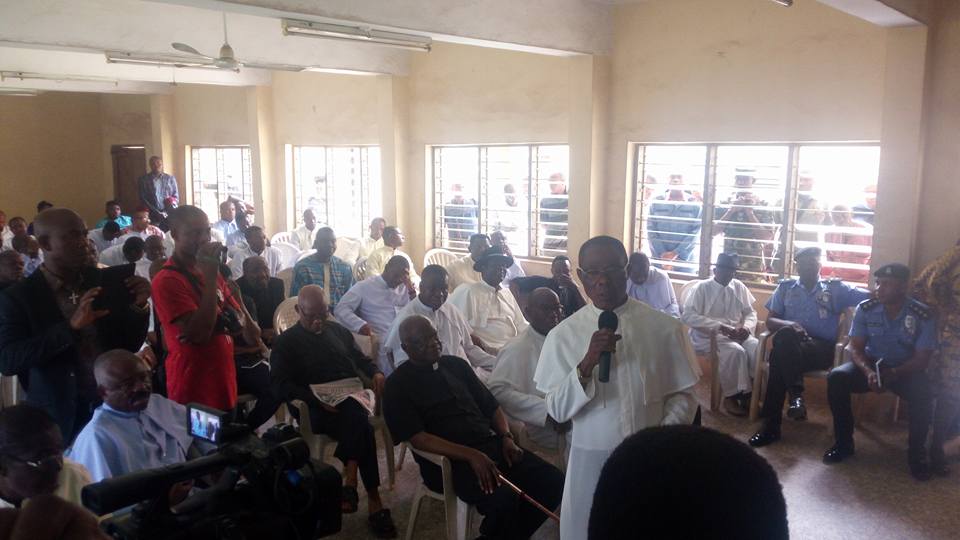 The Diocese had rejected the appointment of  Okpaleke as Bishop of the Diocese. Despite the Governor’s plea, reports said the priests of the Diocese stood their ground and gave their verdict which: Okpaleke will not head the Diocese.

There was no independent confirmation of this report, but a Press Release issued by Sam Onwuemedo, Okorocha’s Chief Press Secretary said  “At the end, Rev. Fr. Dr. Joseph Ezeji gave the vote of thanks, pledging allegiance to the papacy, to abide by the decisions of the Pope and confirming that all Mbaise Priests have written their letters of apology to the Pope. He stated that what the people are asking for is for any Bishop groomed from their soil to lead them. He said that the canon law seems to have been bent in the case of Ahiara Diocese”

Pope Francis had ordered that Okpaleke be restored as the Bishop and vowed to invoke sanctions on those who opposed his appointment.

Their grouse is that Okpaleke is not from Mbaise nation where the Diocese is domiciled.

innonews - December 23, 2021 0
There are strong indications that the suspension of three members of Imo State House of Assembly, could be linked to their presence...

innonews - February 25, 2018 0
The remains of late traditional music maestro, Ichie Mezuo( aka Pericoma) will be buried on April 9, 2018.  The funeral arrangements was released by the...