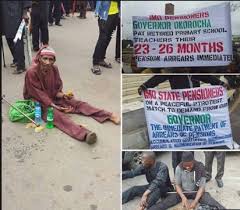 The Imo State government had reportedly issued a form to the pensioners that will compel them to sign and consent to reduction of their pensions.

In a pro bono case brought before the Court presided by Justice Anuwe by the Owerri Branch of the Nigeria Bar Association and led by Barrister Wisdom Durueke, the court also made an order of perpetual injunction against the Imo State government and its officers and agents.

The Court also set aside the document by the Imo State government purporting to slash the accrued pension arrears and gratuity of Pensioners in Imo State by 60% and making the signing of the under taking a condition precedent for payment of their pension and gratuity.

It will be recalled that pensioners in Imo State and the present government had been at cross- roads over several months of pension arrears owed pensioners.

Several protests carried out by the pensioners in Owerri have yielded little or no results in addressing their plight. The state government has continuously claimed that it is gradually paying the pensioners their arrears- a claim consistently disputed by the aged pensioners.

innonews - August 9, 2018 0
The Catholic Bishops Conference of Nigeria (CBCN) has barred priests and religious leaders from endorsing aspirants to elective offices. In a statement by its President,...

innonews - December 7, 2018 0
The All Progressives Congress (APC) governorship candidates in the South East have held a closed-door meeting the Vice President Yemi Osinbajo and...

Uche Nwosu Reveals How He Nearly Sought For Review At Supreme...

innonews - February 20, 2020 0
Former Chief Of Staff, Imo Government House, Owerri, Uche Nwosu, has revealed how he almost sought for a review of the Supreme...