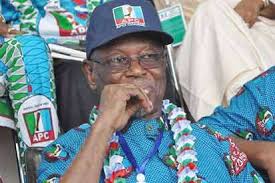 The All Progressive Congress, APC in Enugu State has suspended 20 members of the party