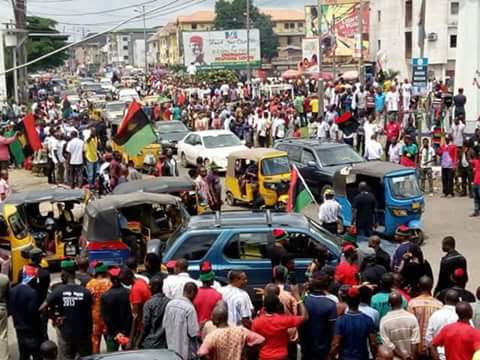 Thousands  of members of the Indigenous People of Biafra, IPOB and pro Biafra agitators have taken over Owerri metropolis.

The crowd increased as passerby and onlookers joined the agitators.

Kanu later addressed his multitude of supporters at Heroes Square,Oweri where he echoed his support for the Biafran agitation.

He maintained that there is no going back on Biafra, saying IPOB does not want restructuring of the country.

Amidst intermittent applause and hailing by Biafra supporters, Kanu urged them to remain steadfast.

An IPOB member who declined to give showered accolades on Kanu for the visit to Owerri,saying it was a morale booster for the IPOB and Biafra agitators in Imo State.

He denied reports on the social media that Kanu was in Owerri to show solidarity to Governor Rochas Okorocha.

innonews - May 10, 2019 0
Former Manchester City and Barcelona midfielder, Yaya Toure has announced his retirement from football. His...

innonews - November 27, 2021 0
Former Governor of Imo State, Senator Rochas Okorocha, has been accused of incurring a debt of N3 billlion naira for a consortium...

Full Statement By Minister Of Justice Ordering Release Of Sowore,...