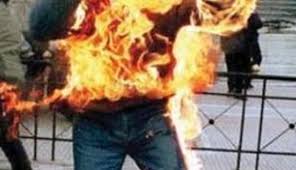 Reports said that the victim went to withdraw some money from a bank and was suddenly attacked by the suspect and two others who were operating on a motorcycle.

An undisclosed amount of money was said to have been dispossessed from the victim after trailing him from a distance.

The victim was said to have raised an alarm which attracted passerby who immediately gave a hot chase and caught one of the suspects while others escaped.

The suspect was immediately set ablaze.