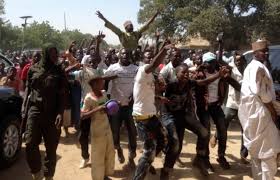 The Coalition of Northern Youths have disassociated themselves from an audio recording inciting people against some ethnic groups in the country.

A statement by the group’s spokesman, Abdul- Azeez Suileman, said the attention of the group has been drawn to an audio recording that tends to incite people against violence against some ethic groups in the country.

They said they find the audio unfortunate and an attempt to divert attention from the current commendable efforts made by the Acting President and other well meaning regional leaders.

The Coalition stated that such pronouncements is coming at a time when meaningful strides are being made towards dousing ethnic tension in the country.

“That of course, is the main borne of contention as we found it ridiculous for a people to be in one country and claim another independent nation at the same time without recourse to due process that regulate the right to self determination.” the statement stated.

innonews - February 13, 2018 0
Elder statesman, Chief Innocent Diala Nwoga has retired from active politics. Speaking to this online newspaper in Owerri, the former Minister said he is no...

1918, The Beginning Of The End. Prof Protus Uzoma

innonews - July 11, 2022 0
Some years ago, I was invited to present a paper at the Institute of Applied Metaphysics India, the seminar was attended by...