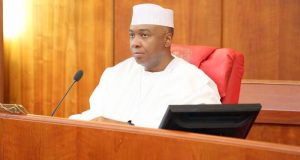 Senate President, Bukola Saraki has assured that the Senate committee on Basic Education would investigate the complaints on the removal of CRK from the school curriculum, just as he appealed for calm over the new nine year Basic Education Curriculum.

The introduction of the new curriculum had stirred controversy among religious bodies in the country.

The Senate president spoke when he received a delegation of the Christian Association of Nigeria, CAN

He said the process began in 2010 when the administration of President Goodluck Jonathan came up with a series of reforms, pointing out that the reforms were intended to reduce the number of subjects in the school curriculum. He said at that time, there were 20 subjects and subsequently reduced to 12.

“ In the process of implementing those reforms, we had this problem. Why I am saying this is so we don’t leave here and believe that it was done to favour one religion or the other” he said

Leader of the delegation, Charles Adisa who represented the CAN President, Samson Ayokunle, called for intervention of the National Assembly to ensure genuine respect for Nigeria’s constitution.