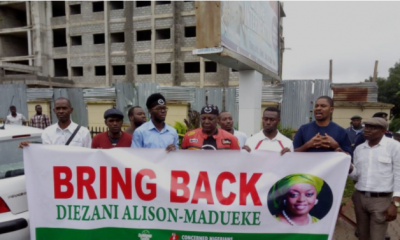 Ace musician, Charly Boy has led protesters of his “Our Mumu Don Do” to the headquarters of the Economic and Financial Crimes, EFCC in Abuja.

They are demanding for the repatriation of a former Minister of Petroleum Resources, Diezani Allison Madueke.

Charly Boy had led his protesters to protest on the streets of Abuja when President Muhammadu Buhari was on medical vacation in London. He had called on the President to either resume work or resign.

His protest later went awry when he was attacked by youths suspected to loyal to President Buhari at the Wuse Market, Abuja.

He called off the protest thereafter.

Charly Boy and his group are now calling on the EFCC to take extra measures to ensure Diezani return her loot which she allegedly stole when she was a Minister.

The former Minister who served during the administration of ex-President, Goodluck Jonathan, is undergoing investigations over alleged fraud committed while she was in office.

Recently, a Lagos Federal High Court ordered the forfeiture of some property linked to Diezani because they were believed to have been acquired using proceeds of stolen wealth.

ASUU In Crucial Talks, May Opt For Nationwide Strike

innonews - August 12, 2017 0
The Academic Staff Union of Universities (ASUU) is in a crucial meeting to determine if Nigerian lecturers will proceed on a nationwide strike or...