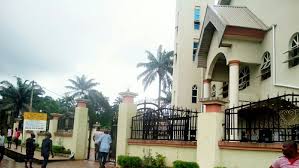 Several accounts had trailed the massacre of parishioners at St. Phillips Catholic Church who were killed by unknown gunmen in Ozubulu, Anambra State.

Parish priest of the church, Fr. Jude Onwuasor has said there were two rounds of shootings executed by a young man dressed in black attire.

He said that the many deaths arising from the massacre were recorded during the second round of shootings.

Fr. Onwuaso told newsmen in Ozubulu: “We were about to introduce the prayers of the faithful when the whole trouble began.

“A man wearing black Polo T-Shirt came inside the church and started shooting recklessly. There was confusion and after looking at the problem, there was nothing one could do except to scamper for safety.

“After the first round of shootings, there was a second round. I guess it was during the second round that some people were shot and killed.

“It was when I returned (from hiding) that I saw that some of my parishioners were dead about five or six of them.

“So many others were bleeding in my church.”