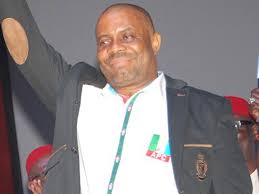 The All Progressive Congress, APC in Imo State has said the opposition Peoples Democratic Party, PDP has no reason to jubilate.

The PDP had been in jubiliation since the Supreme Court ruled that Senator Ahmed Makarfi led National Caretaker Committee is the authentic leadership of the party.

Imo State APC Chairman, Hillary Eke told an Owerri based tabloid in an interview last week  that the PDP should rather stick to its no victor, no vanquished slogan rather than jubiliate that one faction has defeated the other.

He said “ I don’t see any reason why they should jubiliate. I am fighting with my wife, my wife sued for a divorce at the court, the court said we should not divorce that we go back and stay together  I started jubilating , its stupidity. If I were them, I would have said no winner no vanquished. My brother come back, lets go ahead”

He said the PDP’s new found reconciliation has nothing to do with the APC as it does not affect his party’s chances in 2019 in Imo State.

“ The PDP were together in 2015 when we beat them. They were in power at the federal level and we pushed them away.So what is new if they are coming back together” Eke said.

On reports that he flouted the instruction the national chairman of the party to restore the two APC local Government chairmen in Isiala Mbano and Ezinihitte Mbaise local Governments which he suspended, he said such reports were untrue

“All I know is that the national chairman cannot jump into the issues of the wards. The issues of wards starts and end at the state office.

“ If there is anything my national chairman wants to know about the party in the state, he will call me and ask me what is happening”

Eke said he is not disobedient to the  national party chairman in the state as widely reported in the media.

The Imo State APC boss however maintained that the two suspended LGA chairmen were given vote of no confidence.

He assured that the APC led Imo State Government will go ahead with the planned local government election.