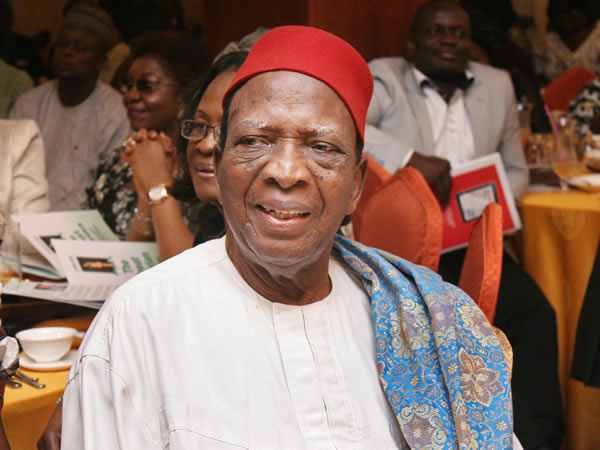 Elder statesman, Prof Ben Nwabueze has explained his sudden absence at a meeting he arranged between South East Governors and leader of IPOB, Nnamdi Kanu.

Nwabueze and Evang, Elliot Ugochukwu- Uko, Secretary of Eastern Consultative Assembly, were to be part of the meeting where Kanu was expected to attend.

Nwabueze and co later shunned the meeting during which the Governors proscribed all the activities of IPOB.

Reports said the Governors were angry over Kanu’s absence which was designed to be a follow up to similar dialogue earlier held at Government House, Enugu,

Nwabueze in a statement said he intended to attend the meeting but changed his mind because the essence of it had been defeated.

The statement read: “On 30th August, 2017 Mazi Nnamdi Kanu, Evangelist Elliot Ugochukwu-Uko and I met with the South-East Governors Forum.

“The meeting was chaired by the current Chairman of the Forum and Governor of Ebonyi State, H.E. Engr Dave Umahi, who, in his conduct of the meeting, exhibited his characteristic sagacity, candour and forthrightness tempered with friendliness.

“Perhaps charmed by the things said by the Chairman and the way he conducted the meeting, Mazi Nnamdi Kanu, on his part, showed an accommodating disposition for an amicable resolution of the crisis, and more specifically a disposition to reconsider the threat to stop or disrupt the 2019 elections and the Anambra State governorship election on 18 November, 2017, but emphasized that the decision does not lie with him alone and that the leadership of the Indigenous People of Biafra (IPOB) must be carried along.

innonews - September 24, 2018 0
The United Progressive Party, UPP is to hold its governorship primaries on October 5. According to a statement by the party’s National Chairman, Chekwas Okorie,...

innonews - June 4, 2020 0
BY: Tunji Adedeji To cushion the negative effect of the COVID-19 Pandemic,Citizen Health Education And Development Initiative (CHEDI )in...

innonews - January 2, 2018 0
I have refrained from commenting publicly on the ignoble arrest of the Elombahs until preliminary findings are enough to make an informed opinion. In...