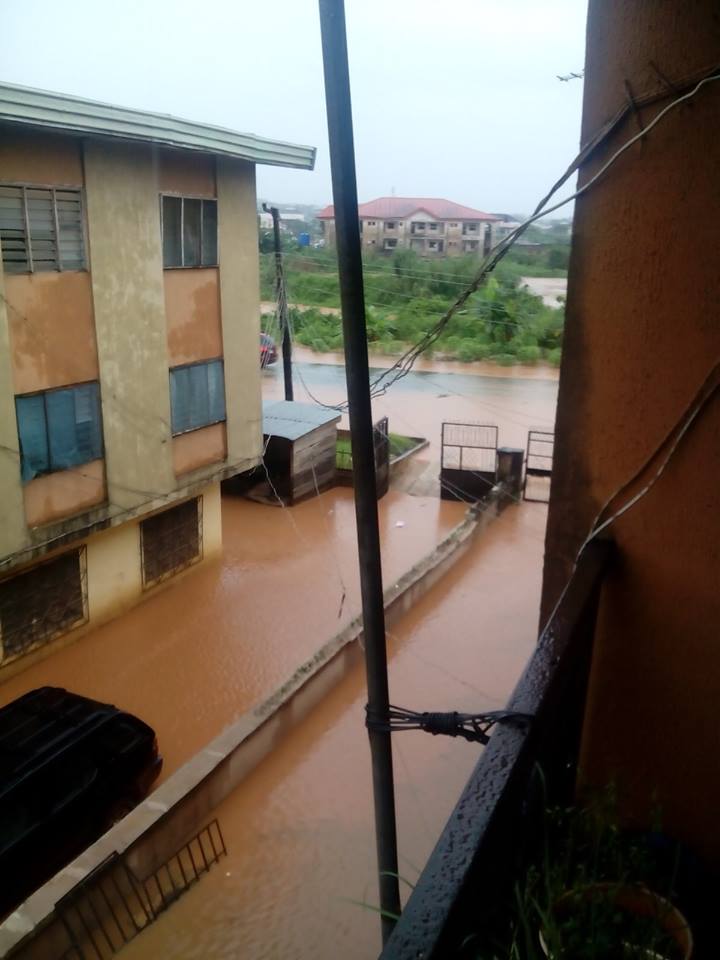 The rain which began at about 5.30am was still raining as 12.16pm leading to unprecedented flood that has forced Owerri residents to stay indoors.  An observer of the menace jokingly said Owerri residents have been put on house arrest by the flood menace.

The flood cut across the entire city. Most offices were scanty because the flood made it unable for residents to access means of transportation. Those who own vehicles were forced to make a u- turn when they observed the intensity of the rain.

Our Roving reporter who monitored the flood along Owerri- Okigwe road saw three buses stuck in a ditch. One of the buses was sighted at the roundabout close to Government House while the two others got stuck just before the Civil Defence Corps office.

Some motorists blamed the flood on the poor construction work on the road which dislocated the original water channels. The Owerri- Okigwe road has been undergoing expansion under the state government urban renewal programme.

At Works Layout, Owerri, the story was not different as most residents were displaced by the flood. Pictures posted to this medium showed buildings been submerged in water.   At Christ Church Road, a major water channel collapsed as the flood intensified forcing residents and motorists to avoid the road. Those desperate to get to their work places had to take off their foot-wears and walk through the flood on bare foot.

The flood has also taken over World Bank Housing Estate and some parts of Trans- Egbu where a  facebook user, Mr. Obinna Akwudike posted on his wall photos of how he helped little children escape the rampaging flood along Dick Tiger Street at Transegbu, Owerri.

CAN To Education Minister: CRK Removed From School Curriculum

innonews - June 22, 2017 0
The Christian Association of Nigeria (CAN) has told the Minister of Education, Mallam Adamu Adamu and the Nigerian Educational Research and Development Council, to...

innonews - August 9, 2017 0
The man alleged to be a suspect in the massacre of worshipers in St. Patrick’s Catholic Church, Ozubulu, Anambra State, Aloysius Ikegwuonwu, also known as Bishop,...

innonews - February 18, 2022 0
Imo State Governor, Senator Hope Uzodimma, has appealed to Imolites to go get vaccinated, in order to protect themselves from the deadly...