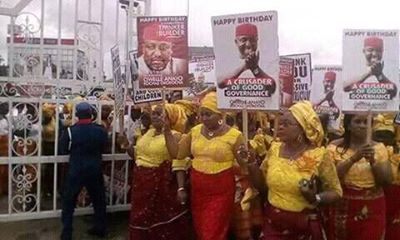 The Imo State government has said about one million women marched on the streets of Owerri, Imo State capital in solidarity for Governor Rochas Okorocha.

About one million women from the Twenty-Seven Local Government Areas of the State marched through the major roads in Owerri, Imo State Capital in solidarity for Governor Rochas Okorocha on the Celebration of his 55th birthday.

The Solidarity march, Monday, September 18, 2017 saw the women stopping at the large premises of the Victory Chapel Government House, where the governor addressed them, thanking them for the wonderful role they have been playing in the success story of his administration.

The governor stated “I am so happy because the strength of this government lies on the massive support it enjoys from the women. That this government is been talked about positively in the world is because of women”.

He averred “One thing I tell to anybody that cares to listen is that I am a special breed made by God for humility. I have never thought evil of anybody and so anybody that wants progress beyond limits must not think evil of me because I am specially made by God. People that loves me, prosper beyond their expectations. This is the way God has made it to be”.

Speaking on behalf of the women, Barr. (Mrs.) Ngozi Njoku and Mrs. Getrude Oduka told the governor that they decided to Celebrate him for his landmark achievements and the free education programme that has remained a big relief to parents and protecting the future of the Children yet unborn, adding that they won’t thank him enough.

In her speech at the event, the first Lady Nneoma Nkechi Okorocha thanked the women for being the pillar behind the success of the rescue mission government and asked them to sustain it as government will continue to better their lives and their children.

innonews - December 28, 2017 0
Super Eagles head coach, Gernot Rohr has given an indication of those he may likey drop from his squad to the 2018 FIFA World...

innonews - May 19, 2017 0
BY GREG UCHE# The Igbo Awareness Coalition, IAC, Imo State chapter, has kicked against the aspiration of former public office holders aspiring to become the...

innonews - March 19, 2018 0
Reports reaching this online newspaper has quoted the Vice Chancellor of Imo State University, Prof Adaobi Obasi saying that one of the 2018 ongoing...