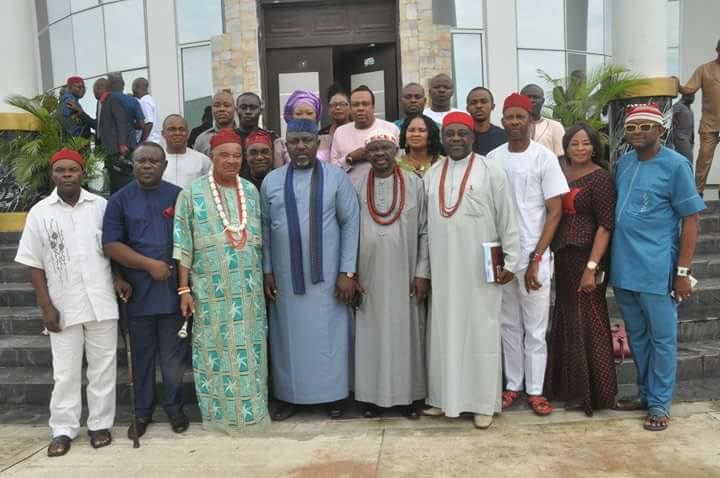 Indications have emerged that Imo State Governor, Owelle Rochas Okorocha and some stakeholders in Owerri have struck a deal in aftermath of the demolition of the Eke Ukwu Owere market.

The visit to Okorocha was facilitated by the member representing Owerri municipal state constituency in the Imo State House of Assembly, Hon. Lugard Osuji.

Osuji is the Majority leader of the House. He had come under severe criticisms from his constituents after the market was razed down recently by government bulldozers. Before the market was demolished, Osuji had said the market will be remodeled- a claim Okorocha later faulted when he went all out to demolish the market.

The lawmaker, who has been battling to manage the relationship between the state government and the people of Owerri over the Eke Ukwu demolition, led some Owerri stakeholders to the Governor on Wednesday

The meeting which was frank and touched on key areas focused on how to resolve the impasse the demolition of the market has caused, though some stakeholders in Owerri are frowning over reports that the four traditional rulers in Owere Nchi Ise went to apologize to the Governor for the manner he was assailed  by Owerri Youths when the demolition was ongoing.

According those at the meeting, the Governor was said to have expressed his displeasure over the recent one week mourning and rain of abuses heaped on him by Owerri elders at the Ugwu Ekwema Civic Centre where a curse was also placed on him for demolishing the market.

After painstaking deliberations, Okorocha was quoted to have said that he will rebuild the market at the same place and rename it Somtochukwu Ibeanusi market.

Somtochukwu was the 10 year old boy allegedly killed by security forces during the demolition of the market.
Owerri stakeholders at the meeting were said to have opposed the renaming of the market, insisting that the name of Eke Ukwu market Owere should remain.

In the end, it was gathered that the rebuilding of the market came as a relief to many Owerrin indigenes who have passionately opposed the demolition of the market.

However, a press release by Governor Okorocha’s Chief Press Secretary, Sam Onwuemedo confirmed that the Governor’s stance to name any project to be built at Eke Ukwu site would be named after Somtochukwu.

The statement reads “Not minding how and where the ten-year old boy, Master Somtochukwu Ibeanusi died on the day the Ekeukwu Owerri Market was demolished for relocation to a better place, the Governor of the State, Owelle Rochas Okorocha has said that the boy would be honoured by the State government, adding that, Douglas Road and any project that would be built at Ekeukwu Owerri Site will be named after him.

“Governor Okorocha who spoke when traditional rulers and leaders of Owerri paid him solidarity visit at the Government House, Owerri, on Wednesday, September 13, 2017, said too that he has been able to liberate the people of Owerri from a wicked clique made up of one or two families who had held Owerri people in bondage.

His words “Government has decided to honour Somtochukwu although the boy’s death was confusing because an action can’t be taking place on Douglas road, and the person died at Mbaise road. No matter what happened, whatever be the case, since that boy died within that period of liberation, that boy must be honoured. And for the fact that the whole of Owerri leaders are mourning him, wore black even to Catholic and Anglican Churches. And if Owerri leaders can mourn a boy from Nnewi, Anambra State, that shows that there is something great about that boy”.

He added, “So for every activity in that Ekeukwu and Douglas road, the boy will be honoured, because he died on the day of the event. That boy is more important than any Eke or Afor, Ekeukwu or Ekenta. So both the Douglas road and project to be sited there will be named after the boy,Somtochukwu. The project will be named Somtochukwu and the road, Somtochukwu road in line with the way all of us are mourning that boy. I will not go back to deity again by naming it Ekeukwu road. Imo State has gone past that level”.

He Continued “They are fighting me because I have liberated you people. What do I benefit by building Township School, rebuilding Emmanuel College, Akwakuma Girls, Government College, Government Technical College, building Owerri Girls, inland roads, ICC, trade and investment centre, two flyovers, two tunnels, heroes square, roads. What do I benefit as Rochas Okorocha if not for the development of Owerri. No governor has done in the history of Owerri, what I have done for Owerri people? My crime is that I have liberated you people from bondage”.

The governor said “I have a stake in Owerri, no governor has invested the way I have invested in Owerri and no Owerri son or daughter has invested more than me in Owerri, both the living and the dead, I stand to be challenged. The worst of it is that when Eze Njemanze died, I offered to build a house for him but the same clique refused. When I came into office 2011, I had meeting with elders of Owerri of which Bob Njemanze was present, they advised me to remove Ekeukwu, that, it was bringing crime to the City. I refused but only to remove it 5 years interval. Just watch the development this will bring to Owerri people”.

He also stated “Ekeukwu has nothing to do with the identity of Owerri people. Owerri cannot develop Owerri. It will take people from outside Owerri to develop Owerri. You must open your doors for people to come in and develop it. It is not true that I am not preserving your identity, I preserved your identity by building Township School and other monumental structures in Owerri. If Ekeukwu means deity that does not want progress, that deity must go, but if it is Ekeukwu that brings progress fine”.

He remarked “I have not seen such accommodating set of people like Owerri people. They are nice people. There is nothing wrong with Owerri but there is a clique in Owerri, a small clique that kept Owerri people in bondage for more than decades. That is the problem of Owerri. What I have come to do in Owerri is to set the captives free”.

He said “Those people resist anything good coming to Owerri people unless it is coming to their family. This is the truth and Owerri people are confused about the true situation. If not for me, you cannot have these traditional rulers now sitting in Owerri. This clique doesn’t want Owerri to expand. The four autonomous communities in Owerri wouldn’t have existed because they fought it. The majority leader in the House of Assembly wouldn’t have been a leader because he would have been mandated to carry cows to their homes and pledge to their deities before they can accept him”.

The governor stressed “I have rescued Owerri from bondage and Owerri is now free. You will see your children now prospering and growing but before now it was only one family in Owerri that grows, one family and one family alone. They produce the Judges, lawyers, doctors and everything but you can’t see any other growth in Owerri. This group of people inside Owerri resist every good thing coming to Owerri. They resort to the courts to stop development coming to Owerri”.

Speaking on behalf of the traditional rulers and the leaders, Majority leader in the State House of Assembly, Hon. Lugard Osuji, Chairman of the traditional rulers from Owerri, HRH Eze Rowland Uboegbulam, Woman leader, Mrs. Tina Herbert and Youth leader, Mr. Chibuzor Onyegbula, told the governor that they appreciate what he has been doing to make Owerri a mega City, adding that people trying to Politicize the relocation of Ekeukwu Owerri Market are not indigenes of Owerri.

Uproar Over NBS Rating Of Imo As ‘Unemployment Capital Of Nigeria’

innonews - August 14, 2020 0
Data released by the National Bureau for Statistics, indicate that Imo State has the highest level of unemployment in Nigeria. In other...

innonews - September 13, 2020 0
The South East Coalition Of Good Governance, SECG, has announced it's readiness to unveil those it described as "Igbo First Eleven, competent...

innonews - September 27, 2019 0
By Constance Eke, Awka. Governor Willie Obiano has reacted to claims in the media the motive why he have...