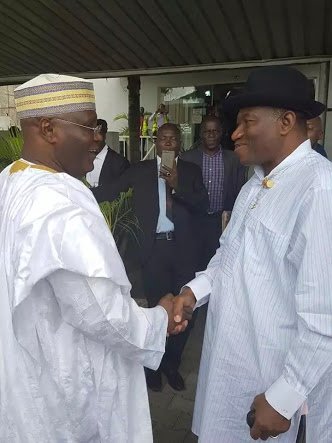 Reports said the meeting is an indication that the former Vice President is set to dump the All Progressive Congress, APC.

The meeting was said to have taken place at the instance of Atiku.

The former President was said to have advised the former vice President to return to the PDP early enough as he has to be a member for a period of time before he could be eligible to contest for political office.

Thisday quoted a source saying “Atiku was advised to return early to enable him to fulfil the eligibility condition in the party’s constitution and also have ample time to integrate his political structure into the PDP’s,” a source privy to the meeting said.

The source added that it was made clear to Atiku, that he stood a better chance to realise his ambition in the PDP than the APC, since President Muhammadu Buhari looked set to be given a right of first refusal by his party’s leadership

Tinubu: My Meeting With Buhari Not Connected To OBJ’s Letter

innonews - January 23, 2018 0
A national leader of the All Progressive Congress, APC, Bola Tinubu, has said his meeting with President Muhammadu Buhari has nothing to do with...

innonews - March 10, 2020 0
Department of the State Security Service (DSS) has called on the media and social bloggers to ensure they publish stories that are...

Onye Ishi Ala Owerre Set To Unveil Ihu Ala Owerre

The Need For Youths To Clamour For Wisdom

innonews - July 14, 2017 1
By Bruno Ugochukwu# It is often said: The quality of crops determines the harvest which figuratively means; that the number of our well groomed youths...