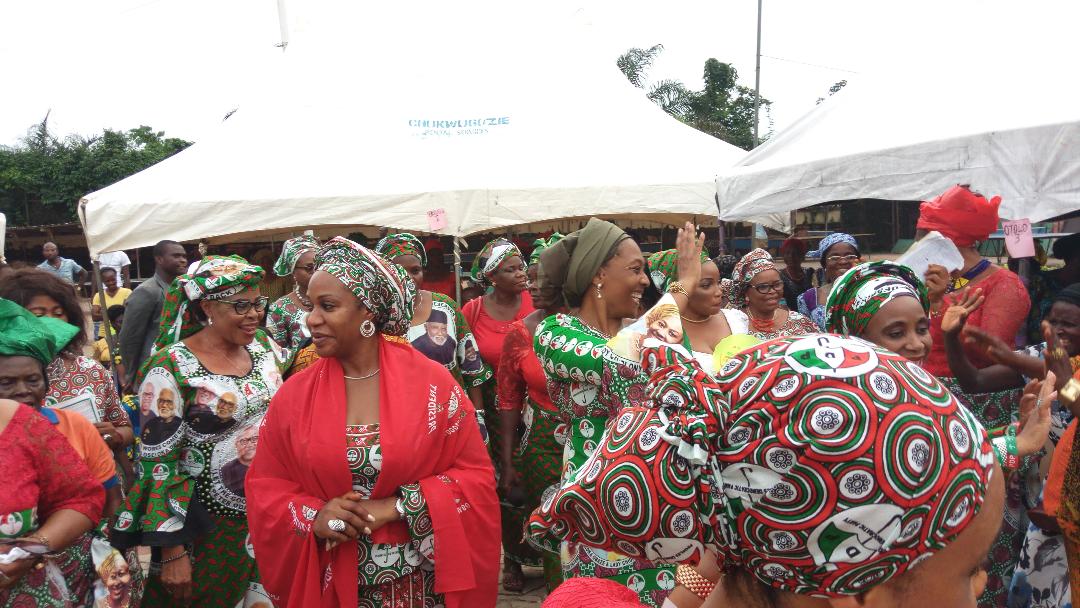 Wife of the PDP Candidate for the forthcoming Anambra Governorship election, Dr. Ofunne Obaze, stormed Omor in Anyamelum Local Government Area to rapturous welcome in the company of H.E Margaret Obi, Wife of the former Governor, reiterating Oseloka Obaze’s promise of free, compulsory and quality education from kindergarten to JS3.

Dr. Obaze, who’s an American-trained Assistant Clinical Professor of Pediatrics and Emergency Medicine, told the gathering of Women that Obaze’s government will devote 26 percent of the budget to education with 10 percent going to mission and private schools as their students are children of Ndi Anambra. She assured the gathering that with the 10 percent meant for parochial schools, school fees will be reduced drastically decrying the astronomical rise in the fees since this administration came on board. “During Peter Obi’s tenure, school fees was 2,000 naira now, it is 11,000 minimum and for some new students, it’s over a hundred thousand. It’s unacceptable, every child must have equal opportunity and access to education” she said.

Dr. Obaze promised that government of her husband will restart the 5,000 naira monthly welfare stipend for people above 75 years, which was stopped by the current administration.

In Umueri, Anambra East Local Government Area Dr. Ofunne Obaze was greeted by overwhelming crowd repeated Mr. Oseloka Obaze’s promise of free education from kindergarten to JS3 urging Women to think about the future of their Children and families when they are offered money to vote saying “if you eat today, will you have another for tomorrow? that should bother you. Vote wisely”, she ended.

The Women who expressed disappointed that their brother could turn his back on them and only focus on his village in Aguleri promised total support for Oseloka Obaze in the November election.

Speaking earlier, Wife of the former Governor, Mrs. Margaret Obi, decried the failure of the incumbent administration saying that her husband has no personal issues with the governor but is only saddened that what he took pains to build us turning to ruins IN his very eyes. She reminded the Women that while she and her husband campaigned for the incumbent in 2013, they promised to lead the campaign to oust him from power if he fails to perform and that is exactly what they are doing.

Mrs. Margaret reminded the Women that she was the first Governor’s Wife that visited Ezi Agulu Otu saying “they accused us of doing so much work in Anambra North in our first term, now your brother is not even doing that. He’s only working in Aguleri. We are in Anambra State not Aguleri State” she said in reference to the alleged localization of the very few projects of the present government in his Aguleri village.

The day one of the tour ended with of Women, Youths and Children in Umueze Anam in Anambra West Local Government Area with Dr. Ofunne Obaze promising the Women that their government will not be on billboards and posters but will be with and among the people. She urged the Women to vote PDP as it was the only party with a detailed agenda for them saying that Mr. Oseloka Obaze has already started fulfilling his promise of a 60/40 gender ratio with his choice of a Woman as his deputy governor. She urged them to vote on the day and stay back to ensure that their votes count.

innonews - April 7, 2022 0
Barring any last minute change, the Vice President, Yemi Osinbajo, will on Saturday, disclose his position on the 2023 presidential election, online...

innonews - July 13, 2019 0
BY: RALPH EJIMKONYE, ABUJA Top chieftains of the All Progressive Congress, APC in Imo State are working round the...

Imo Guber:Key Factors That Will Shape Its Outcome

innonews - February 17, 2019 0
As Imolites go to various polling units to elect a new Governor of Imo State on March 9, it is uncertain which...