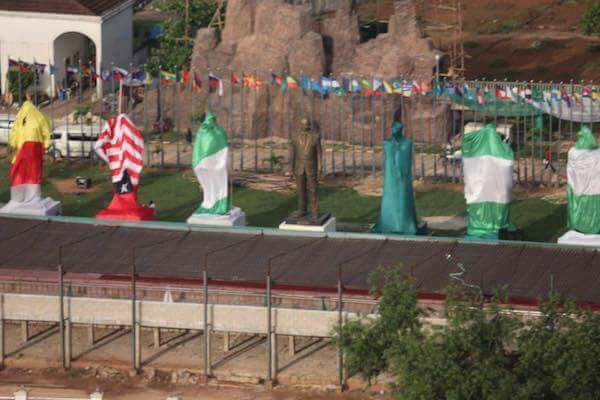 Following the unveiling of the Statue of South Africa President, Jacob Zuma in Owerri,Imo State, South East Nigeria, the presence of other statues yet to be unveiled has precipitated diverse reactions and anxiety among residents of Owerri.

It was observed that aside the Zuma statue that was unveiled at the weekend there are other statues drapped in national colours  of Nigeria and other foreign countries which indicates that more foreign personalities will be in the state sooner or later.

Mr. Chima Ejimkonye, a public policy analyst who spoke to our reporter said Governor Okorocha should have immortalized great sons of Imo State first by unveiling a statue for the first elected governor of Imo State, Late Sam Onunaka Mbakwe before honouring any foreigner in the state with a statue.

“There should have been a statue for Mbakwe, a man who laid the foundation for the development of Imo State. Building a statue for Zuma, a visiting South Africa President who has been named in corruption charges in his country is an insult on the collective sensibilities of the people of Imo State and the ruling All Progressive Congress, APC particularly President Muhammadu Buhari who has fought corruption standstill in this country” Ejimkonye said.

” Zuma does not represent anything, he is not a freedom fighter we hear and know about in South Africa. We all know that the story of South Africa is not complete without the late Nelson Mandela. It was Mandela that liberated South Africa and not Zuma.  Besides, why should we build a statue for Zuma or any foreign leader in Imo State? How many Nigerians living or dead have statues in foreign countries . What would our children learn when they see the statue of Zuma, a foreigner who has no roots in Nigeria. This is unacceptable” he said

Chief Rufus Osueke, an Owerri based businessman  said the statue of Zuma and those yet to be unveiled is a waste of funds and portrays the state government as insensitive to the plight and sufferings of the people.

” We saw Zuma statue unveiled in Owerri and we also saw some covered ones with flags of different countries on them. This means so much state funds was wasted to get those statues up. What are the gains of such statues when salaries of workers are not paid and pensioners do not get their pay” he said

innonews - October 10, 2017 0
The demolition exercise of the Imo State government continued Tuesday with a one storey building demolished along Wethedral road, Owerri. The owner of the building...

innonews - April 19, 2018 0
Traditional Rulers of the 607 communities in Imo State have been mandated to pay N6 million naria as Development Levy.  The State Government says...