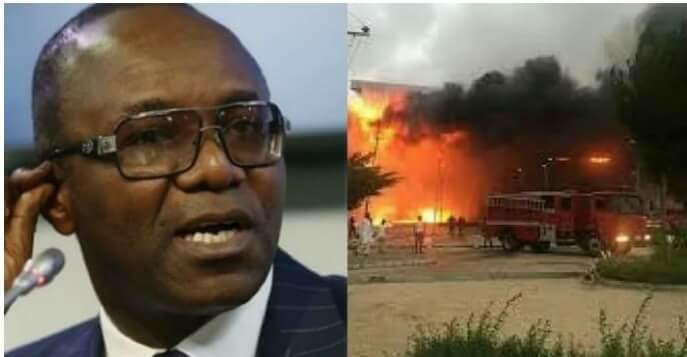 Fire has ravaged the Abuja home of Nigeria’s Minister of State, Ibe Kachiukwu. News of the fire incident had circulated on social media on Sunday.

Kachiukwu’s spokesman, Idang Alibi was reported to have confirmed the incident.

He told PREMIUM TIMES “it was a mere power surge that was contained immediately” He said no one was hurt in the inferno and blamed it on a faulty electric cable in his principal’s bedroom. The Minister was said not be at home during the outbreak.

The Minister’s aide said the fire was contained within a few minutes by police guard and others who were at the property located in the highbrow Asokoro neighbourhood.

The development comes amidst raging controversy over the October 3 leakage of a memo which Mr. Kachikwu addressed to President Buhari about alleged infractions at the Nigerian National Petroleum Corporation.

“No foul play was suspected in the fire incident,” Mr. Alibi said.

Today, We Draw A Line, Hate Speech Would No Longer Tolerated...

innonews - August 6, 2018 0
As the governorship primaries of the All Progressive Grand Alliance, APGA in Imo State draws near, some governorship aspirants have resorted to moves geared...