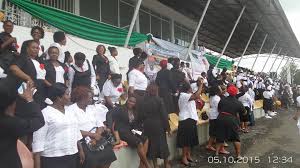 The success of  the free education programme in Imo State has been attributed to the contribution and dedication of teachers in the State.

“As the teachers in the State joined their colleagues all over the Country to celebrate their day, the Governor, Owelle Rochas Okorocha has commended them for their unbridled commitment and their avowed patriotism and said that he would continue to appreciate them as governor and even when he must have also left as governor.

“The governor remarked that the teachers in the State have always exhibited high level of selflessness in the discharge of their primary assignment and in the way they handle students and pupils entrusted into their cares. He also commended the leadership of the Nigeria Union of Teachers (NUT) in the State for their dedication.

“He noted that the remarkable performances of students from the State in public exams could only be seen as the outcome of the hardwork of the teachers in the State and added that as they care for the students, God would also care for them and their families.

“The governor assured that he would continue to hold the teachers in the State in high esteem and would stop at nothing to see to their welfare and prayed God to bless all of them abundantly.