Home Politics Oyegun: APC Removed A Sitting President, We Will Do Same In Anambra... 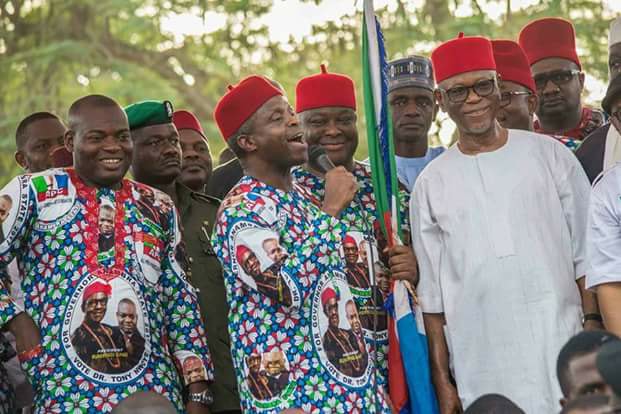 The All Progressive Congress APC Friday flagged off the campaign of Chief Tony Nwoye, the All Progressive Congress, APC governorship candidate in Anambra State with a vow to remove the present APGA government in the state.
National Chairman of the APC, John Odigie Oyegun said having achieved such feat in 2015 when the APC defeated the PDP led government to take over power, it will do the same November 18.

He said there is no alternative than for the people of the state to join the mainstream of Nigerian politics by voting Nwoye and the APC.

Earlier, the Vice President Yemi Osibanjo had assured Nigerians that the present administration would complete the second Niger Bridge before the end of 2019.

He said N2 billion had already been paid to the contractors as mobilization fees for the take off of the project.

Mr. Osinbajo said that all projects embarked on by the federal government would be completed without exception including rail and federal roads.

The Vice President said that Anambra was the first to start the Federal Government School Feeding programme, adding that the programme had successfully spread to many other states.

According to him, there is no alternative than for the people in the state to join the mainstream of Nigerian politics by voting Nwoye.

Earlier, the Minister of Labour and Productivity and former governor of the state, Chris Ngige, urged the people of the state to identify with the aspiration of the APC for the state.