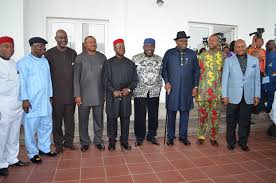 Governors of the South East and South- South States are to converge in Owerri, Imo State capital Sunday for a Summit.

According to a press statement by Governor Okorocha’s Chief Press Secretary, Sam Onwuemedo, Governor Rochas Okorocha will host the Governors under the aegis of the South- East and South- South Governors Forum.

“The governors will arrive the State on Sunday, October 8, 2017 and depart on Monday, October 9, 2017 after they must have deliberated on issues concerning the two-Sister geo-Political Zones and the nation at large.

“The governor, the Rescue Mission Government and the good people of the State pray that the good Lord would grant the visiting governors and their entourage his journey mercy.

APC South East Leaders Open Up On Party’s Performance In...

innonews - April 27, 2019 0
BY RALPH EJIMKONYE, With Agency Report Leaders of the All Progressive Congress, APC in the South East met...

innonews - November 24, 2017 0
A head-on collision between a loaded passenger bus and a truck ferrying petrol has occurred along Owerri/Orlu Road near Njaba River Bridge in Imo...

Ohaneze Presidency: Ex Minister May Take Over From Nwodo

innonews - December 31, 2019 0
BY KELECHI ONWUDIWE Baring last minute changes, a former Minister of the Federal Republic of Nigeria from Imo...

innonews - January 10, 2018 0
Imo State Governor, Rochas Okorocha and a former Governor of Abia State, Dr. Orji Uzor Kalu have harped on the gains for Igbos if...