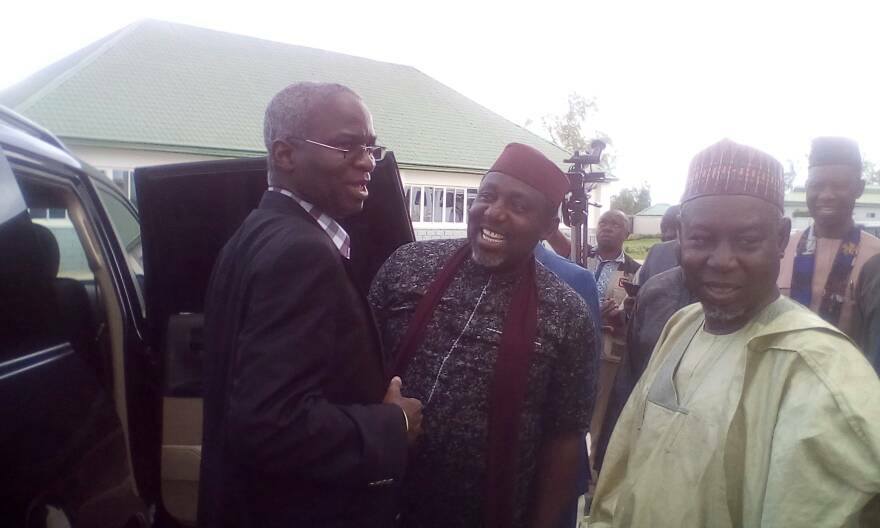 Top on the agenda of discussion with Imo State Governor, Rochas Okorocha was the rehabilitation of some Federal Government roads including the Owerri-Aba and Owerri- Port Harcourt Roads.

According to a Government House Press releases signed by Sam Onwuemedo, Okorocha’s Chief Press Secretary, he said  the Owerri/Aba road and Owerri/Port-Harcourt road that have become death–traps for users would now be fixed without delay, disclosing that the Minister of Works, Housing and Power, Chief Tunde Fashola has directed the Contractors handling the roads to see him immediately with a view to go back to the roads to ensure that they are completed.

The governor had spoken when the Minister visited him on courtesy call, with his team at the Government House Owerri Tuesday, Stating that he had taken up the issues of the two major roads in question, Power and the Federal Housing Projects in the State with the Minister during their private discussion.

His words “The Hon. Minister for Works, Housing & Power is in Imo for a short meeting. I have made my concern known to the Hon. Minister as regards the neglect in the State, especially with regard to the Aba-Owerri road and Port-Harcourt-Owerri road. And currently, it appears to me that the Hon. Minister has done a lot on his part to ensure the completion of those roads”.

He added “the minister has also informed me that he has called the contractors concerned to see me immediately with a view to completing the Aba – Owerri road project and Owerri – Port-Harcourt Road project. We also talked  about the issues of power and light in the State. He has indicated the interest of his ministry to ensure a stable power supply. We have also discussed about the Federal Housing project which he said that the issue of land will soon be resolved”.

The Minister, in his briefing to Journalists at the end of the Parley said “I have to commend the governor in his effort to lift the quality of life in Imo State and the lofty achievements and programmes he has embarked upon in his rescue mission government. We came in for our monthly Power meeting. Some of the issues we discussed were the expansion and distribution network of some of our communities like Nebo, New Heaven, Onitsha, Aba etc. on the power quality and service experience”.

He remarked “We have grown the generation capacity from 2,696 MW in 2015 to 7,000 MW in September this year. Transmission has also improved from 5,000 – 6,900. We now have a new problem and that is our production capacity has exceeded the distribution company’s wholesale power. So, power currently put on the grid is 4,600MW, Compare that with what we had 3years ago, we have essentially doubled it, but we can do more”.

He further stressed “The governor has also brought my attention to Egbema Power Plant and its challenges. We inform your Excellency that we make progress month by month. We expect that your power experience should be better and how to extend services to places like Nnewi, Ihiala and Okija which are parts of the Enugu distribution franchise. We can’t discuss power in these areas without the inter-state geo-metric power issue. And how to dissolve it”.

Akachi Statue, Though Of No Value, I Never Ordered Its Demolition-...

innonews - May 30, 2019 0
Governor Emeka Ihedioha says he never instructed the pulling down of Akachi statue near Aba Road, Owerri. The...

Video: Rhoda Ebun Teaches Us On How To Dress To Suit...

innonews - April 24, 2018 0
A popular celebrity Stylist, Rhoda Ebun showed us in her episode of style called Curvy 411 featuring  Eki Ogbunor on how women with fuller...