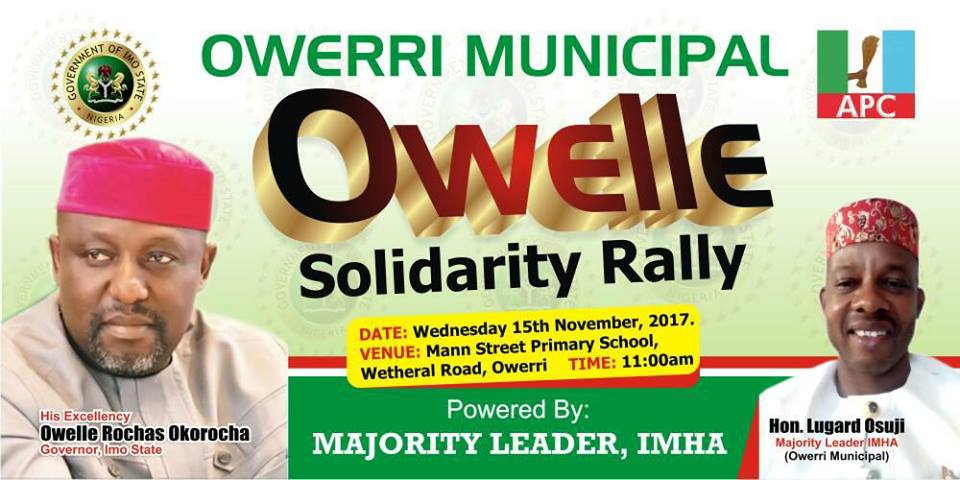 BY BEN UKWUOMA#
Few days after key political players in Owerri zone converged to insist that it is the turn of the zone to produce the next governor of Imo State, there has been noticeable upsurge of political activities in the zone- real or stage managed- to show support to the Rescue mission government in the state.

On the day leaders of the zone announced their resolution to unite in the task of producing the next governor of the State, one of the five communities- Umuoyima community in Owerri municipal- issued a certificate of indigeneship to the Governor’s Chief of Staff, Uche Nwosu.

Nwosu is widely believed to be Okorocha’s chosen successor though there is no official announcement on that yet by the Governor. He is from Orlu Zone where Okorocha comes from.

This newspaper observed that some of the recent political activities aimed at sending signals that the zone may not be on the same page in realizing the Owerri Zone for Governor agenda is a rally to be held in Owerri municipal and promoted by  a leader in the party in the area  and Majority Leader in the Imo State House of Assembly, Hon. Lugard Osuji.

The event holds at Mann Street primary school where party chieftains and political leaders of the APC are expected to drum their support for the Okorocha government and whoever he selects as his successor in 2019.

Also, APC stalwarts in Owerri West Local Government yesterday visited one of the political arrow heads of the Okorocha government, Chief Charles Amadi (Chavon) where they pledged to sustain their loyalty to the Governor.

Also, APC stalwarts in Owerri West Local Government yesterday visited one of the political arrow heads of the Okorocha government, Chief Charles Amadi (Chavon) where they restated their loyalty and support for the government.

Led by a former commissioner in the Rescue Mission government, Innocent Ekeh, he said ” We are here to discuss the concerns of “NDE NDU OWERRI ZONE” while pressing forward, the need to unite the zone in a manner that will guarantee victory for our party.We are not here to discuss who becomes Commissioner or who does not, rather what will bind us together as a people. And to say the least, OWERRI West has benefited immensely from the Rescue Mission Government both in infrastructural developments and the likes”

The recent political activities tend to send clear signals that political appointees in Okorocha’s government from Owerri Zone are not so comfortable with the position of some other leaders in the zone who insisted that it is the turn of the zone to produce Okorocha’s successor.

innonews - June 25, 2018 0
I write this piece today in order to consolidate my conviction on my commitment to emancipate the Imo youths from the political quackmire of...

innonews - November 5, 2018 0
There is no ceasefire in sight between Imo State Governor, Rochas Okorocha and National Chairman of the All Progressive Congress, APC, Comrade Adams Oshiomole. Oshiomole...

innonews - December 28, 2018 0
APC State Governors are to run President Muhammadu Buhari’s campaign in the States. They are to serve as...