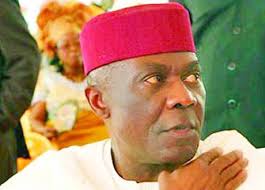 Chief Senator Francis Arthur Nzeribe has said that he received the news of the death of Nigeria’s former Vice President, Chief Dr. Alex Ekwueme, who died in London at the age of 85, with sadness and extends his deepest condolence to his family, Ndigbo and Nigerians at large.

Ogbuagu in a press release signed by his Chief Press Secretary (CPS), Mr. Collins Ughalaa, described Dr Ekwueme as a good friend, noting that his death is a huge loss to the Igbo Nation and Nigeria at large.

Senator Nzeribe said that Dr Ekwueme was a fine gentleman who was really needed at this time of our nationhood.

He noted that though Dr. Ekwueme died at the age of 85, there was no law stating that one must die at 85 years, saying: “I wish he lived longer and achieved more for the Igbo Nation and Nigeria”.

Ogbuagu also recalled with nostalgia the last time Dr Ekwueme visited him in his Haven of Peace country home in Oguta, Imo State, in company of one of his wives and Chief Christopher Nwapa, and they discussed frankly on a whole lot of issues bothering on the Igbo Nation and Nigeria.

He also noted that the late former Vice President had fought a good fight, saying: “As Nigeria and Ndigbo mourn his exit we must not forget that he had fought a good fight and the rest is left us who are still alive. I wish his soul peaceful rest in God’s bosom and pray that his family and all affected by his denise find the fortitude to bear this big loss”.

innonews - July 10, 2017 0
BY RICHARD DIRIM ODU# Any big and trending story in Nigeria today appears to be the one containing gists of corruption which, to every Nigerian,...

innonews - July 30, 2018 0
More reactions has continued to trail the killing of Hon Sunny Ejiagwu, the Ideaton North Local Chairman of the All Progressive Congress, APC. In a...