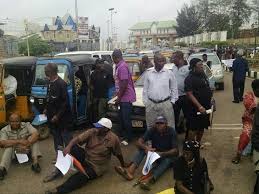 Ezeji’s death had sparked uproar in the media who linked his death to his persistent struggle for the payment of pensions to pensioners. This newspaper had  reported last week that some pensioners were unhappy over bounced cheques issued to them by the Imo State Government.

Speaking during a condolence visit to the family of the late NUP boss, to Mrs. Ezeji, the President Ikeduru circle of friends Dr. Opara enjoined the family to bear the loss of her husband with great fortitude. He opined that God, who is the author and giver of life, knows why he decided to take Sir Ezeji now. He posited that death is a prize every mortal must pay and asked her to take solace in God at this moment of grief.

Dr. Opara went further to extol the virtues of Sir Gideon Ezeji, whom he described as a dogged fighter who nobody can buy with money. He also revealed that Chief Sir Ezeji was the immediate past President of Ikeduru Circle of friends and the head of all the knights in Ikeduru Anglican communion. According to Dr. Opara Chief Ezeji was one man who trained his children with the fear of God and today his children are all well placed in the society. He equally stated that his group will participate fully during his burial slated for 15th December 2017.