Home News I M Not After My Deputy- Okorocha 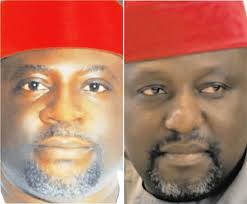 Imo State Governor, Rochas Okorocha has denied reports in the media that he “approved” the impeachment of his deputy, Prince Eze Madumere by the Imo State House of Assembly.

He said there is no iota of truth in the source-less report coming barely twenty four hours opponents of his administration in the state invaded the social media and local tabloids claiming that he had sacked the Chairman of the Imo State Council of Traditional Rulers, Eze Sam Ohiri.

A statement by Okorocha’s Chief Press Secretary, Sam Onwuemedo said It is not true that the governor has approved for his deputy’s impeachment “especially where there is no reason for anybody to think along that line”.

part of the statement reads “The Opponents of the administration in the State have become so frustrated that they have nothing else to cling on except falsehood and weightless propaganda. Their future in the Politics of the State with particular reference to 2019 is very bleak. There is no light at the end of their Political tunnel and they have begun to resort to moonlight tales and games”

“For the sake of strengthening the truth, and burying falsehood, the governor has not given any approval for the impeachment of the Deputy-Governor. And you do not impeach anybody through approvals. Those behind all these gimmicks are uninformed and lazy. They have nothing serious to keep themselves busy. Hence, all these cock and bull stories. They have our sympathy” the statement concluded

Ikedi Ohakim: I M Not A Saint,I Admit My Fault

innonews - November 18, 2017 0
Former Governor Ikedi Ohakim of Imo State has responded to his critics, saying that though he is not a saint he always admits his...

Under Buhari, Military Generals Have Faced Trial For Corruption- Oshiomole

innonews - July 4, 2018 0
National Chairman of the All Progressive Congress, APC, Comrade Adams Oshiomole has stated that since President Muhammadu Buhari was elected in 2015, the anti...