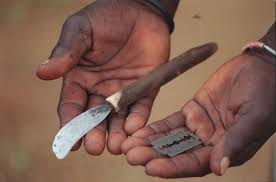 A Medical practitioner and Chief Medical Director of Holy Wounds Hospital Dr. Sir Uchenna Anyanwu has condemned the age long practice of female genital mutilation in Nigeria. He made the assertion while interacting with Journalists to mark the International day for the elimination of violence against women.

Dr Anyanwu who has been known for his philanthropic gestures and free medical care both in Abia and Imo state is advising the government to do more in the area of sensitization in the rural areas against the obnoxious practice of female genital mutilation.

He recalled that Friday the 24th of November, 2017, the world marked the International day for the elimination of violence against women an opportunity the forum created to address some of these ills in the society.
Violence against women and girls is one of the most wide spread persistent and devastating human rights violations in our world today and this is causing a lot concerns.

Dr Anyanwu said that violence against women in the world today ranging from rape, sexual assault, domestic violence, dowry murder, early marriage femicide, female genital cutting, Honor killing etc has been on the increase because the laws are not strong.

Dr Anyanwu equally observed that female genital mutilation/cutting refers to all procedures involving partial or total removal of the external female genital or other injury to the female genital organs for cultural or other non-medical reasons. FGM/C is a deeply entrenched social norm. Communities practice FGM/C in the belief that it will ensure a girl’s proper marriage, chastity, beauty and family honour.

He also asserted that the practice is such a powerful social norm that families have their daughters cut even when they are aware of the harm it can cause on girls, according to him, a traditional practitioner usually a woman, performs FGM/C often without any form of anesthesia or analgesia using non-sterile instruments such as scissors, razor blades or broken glass. FGM/C has serious implications for the sexual and reproductive health of girls and women. The effects of FGM/C depend on a number of factors, including the type performed, the expertise of the practitioner, the hygiene conditions under which it is performed, the amount of resistance and the general health condition of the girl/woman undergoing the procedures. Complications may occur in all types of FGM/C.

He informed the media that the immediate complications includes serial pain, shock, hemorrhage, tetanus or infection, urine retention, ulceration of the genital region and injury to adjacent tissue, wound infection, urinary infection, fever and septicemia. Hemorrhage and infection can be severe enough to cause death. In fact, these account for the frequent deaths associated with FGM/C in Nigeria today. If families were to stop practicing on their own they would risk the marriage prospects of their daughters, family’s status and eventual forceful imposition of FGM/C on their daughter.

Dr Anyanwu therefore advised religious leaders, NGOs, WHO and all at the helm of affair’s should look into this recurring cancer that has eaten deep into the fabric of our society and help bring an end to this ugly and obsolete practice on our Nigeria girls and women.

innonews - September 30, 2017 0
BY COLLINS UGHALAA# It is surprising that after a period of one month, Senator Ifeanyi Araraume, through his spokesman, Awurum Darlington, and one Prince Chinyochaobi,...

innonews - April 9, 2019 0
There were no casualties in the fire incident that took place at the Sam Mbakwe International Cargo Airport,...

Technology With A Human Face: The Egato System, Solution To Unemployment...

innonews - June 6, 2019 0
People are clamouring for the success story of Late Governor Sam Mbakwe in Imo State today. Governor Mbakwe did not...

innonews - September 20, 2018 0
Vice President, Yemi Osibanjo is expected in Imo State on Saturday, September 22, 2018 on a two day working visit. According to a statement by...