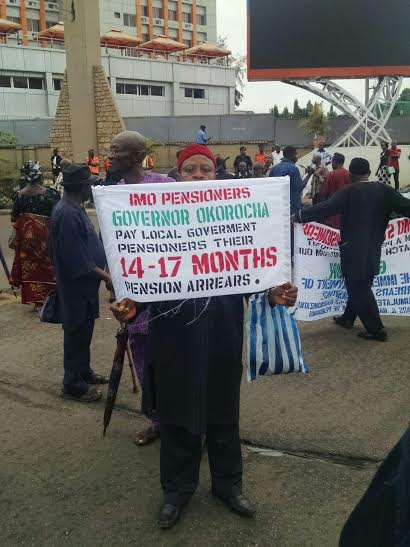 The 16th Century wit, Aesop, in his fable on the Crow and the Sheep narrated that, “A troublesome Crow seated herself on the back of a sheep. The Sheep, much against his will, carried her backward and forward for a long time, and at last said, “if you had treated a dog in this way, you would have had your deserts from his sharp teeth.” To this the Crow replied, ‘I despise the weak, and yield to the strong. I know whom I may bully, and whom I must flatter; and thus I hope to prolong my life to a good old age.

The above saying could be attributed to the situation of pensioners in Imo State and the treatment given to them by the State Government. Pensioners in the State are being treated as rejected and useless to Imolites, despite their unrented dedications to the State while they were in active service. This treatment testifies ungratefulness.

Pensioners and civil servants in Imo State are owed salaries, pensions and other entitlements, regardless the present economic state of the nation. The problems with the living conditions of these pensioners is that they have been made beggars, who have no choice and voice, and given realties about their financial situations, the pensioners find it difficult to cope up with the unending ‘come today come tomorrow,’ especially with regards to transport fares, stress and their health statuses.

Everybody knows the difference between pension and salary, especially how meagre the latter is, with regard to both the present economic situation of the country and the purchasing capacity of the meagre resources coming from pension wages. These realities notwithstanding, the present administration in Imo State not only owes the pensioners the meagre pays for months, but has as well arbitrarily cut the pensioners’ wages. What an abomination!

More so, pensioners in Imo State have been toasted about by those in charge of their funds. The toast range from the pensioners being invited to unending screening and verification exercises (at venues far away from their vicinities and oblivious of their depreciating health conditions), to being made to waste borrowed money to come today and tomorrow for their unpaid wages, and from either being told and deceived with one tale or another, to being given bounced cheques from banks, on pension arrears lingering from anterior months.

This act indeed is like the back and front load the Sheep of Aesop. And because Imo pensioners like the Sheep have no sharp teeth like the referred dog to attack the oppressing Crow, the pensioners are taken for granted. These notwithstanding, there are also self-sacrificing individuals who never in any situation accept their faces smeared with mud and mess, despite how ugly are their living realities.

It is on this note that one sees Comrade Gideon Ezeji, the late President of Nigeria Union of Pensioners (Imo State Chapter), who since 2016 has championed and spearheaded the arbitration court over the arbitrary cut in pensioners’ wage by the government as well as the deprivations of their monthly pensions and other benefits. This effort was successful as the pensioners got positive judgement for themselves.

But this judgement added nothing to the plight of the distressed and hunger-ridden pensioners, who sorrowfully loom in abject poverty since their retirements. This NUP president, like his colleagues suffered hunger, poverty and illness, and above all alleged fears of threat till he died in his early 70s, which is the modern African man’s boom with full vitality and vibrancy.

Now the self-sacrificing impoverished President of Imo pensioners is dead, dying with huge debts still unpaid by the State government, what is the fate of the rest pensioners who either have no such sacrificing spirit or have no such personal resources to fund and champion the course of maltreated pensioners in the State by the present State Government?

Now the President of Imo Pensioners is dead, will the rest pensioners die of hunger and maltreatment unassisted? Will there be another Messiah in their midst to take up this altruistic mission? Will the maltreating administration now feel comfortable and at peace by his demise and thus go on with its insensitivity to the plights of Imolites under pension? So now the President is dead, what next- Hopelessness or will he and similar others be paid post-mortem, the owed pension wages and corrected the bounced cheques of Access Bank given to him thrice? What a government of wickedness!

The above reminds me of my Mexican friend while in the United States of America called Fruto Jenero, he wanted his son to be a bad and radical boy-drug lord. Thus he advised the boy, “In this world, if you want to succeed, dress like a lawyer, behave like a priest, but think like a thief”. The secret of this advice is that in dressing like a lawyer, his true colour will not be known. In behaving like a priest, he will become the ultimate hypocrite. In thinking like a thief, then lies his true colour and identity. Jesus Christ said, “By their fruits you shall know them”. You cannot know a man through his secret thoughts and like Socrates, “No man living has ever seen a man.” But Imo pensioners can boast of seeing a man whose administration reflects the admonition of Fruto Jenero.
The French literary icon, William Shakespeare, in Hamlet said that “The single and peculiar life is bound with all the strength and armour of the mind to keep itself from annoyance, but much more that spirit upon whose weal depends and rests the lives of many.”
Imo pensioners need to rise and ensure that the sacrifices of late Comrade Gideon Ezeji are not in vain. The fight and struggle need to be more intensified now if they mean to achieve any positive result. Of a truth, civil servants still in service need not fold their hands and watch their predecessors being suffered like this since soonest, they will join the chorus and be treated same. This calls for urgent reaction from the Nigeria Labour Congress and all its allied forces, to rise and fight this injustice for the sake of the poor pensioners and for the sake of their own turn tomorrow.

Besides these, it is high time well-meaning Imolites and indeed stakeholders in the State rise collectively against this maltreatment as the pensioners are all our parents, grandparents, uncles, aunts, in-laws, compatriots of same political and lineage in-group and divide.
There is also need for the Imo State government to change its attitudes towards pensioners and remember that a biting-fight between a hound and a toothless cock is no fight in nature, but a hunt and game. Consequently, triumph thereof is no victory at all; not even the pyrrhic type, but mere vanquish mission. The present treatment given to pensioners in Imo State is nothing but clear incentive to still serving civil servants to engage in corrupt practices as perspective planning scheme against gloom-days ahead, at their retirements.

The Imo State government cannot claim to be on rescue mission while the rescued suffer in abject poverty, groan in un-soothing pains, wallow in deep distress and languish in unremitting hunger and wants. If truly there is Rescue Mission, there must be salvation for the rescued, and salvation is never starvation.

If the Imo State government truly supports the administration of the President Buhari-led anti-corruption crusade, both corruption and its sleaze culture booming in the State, especially since 2011, as well as opportunities heralding or instigating its growth and development must be prudently managed ahead. As it is said, prevention is better than cure.
Many social analysts researching on sleaze culture and spate of corruption and sundry crimes in Imo State and Nigeria at large reveal poor workers’ welfare and mismanagement of post-service affairs as among factors responsible for the increase in corruption in the country.

Not only this, it also leads to indolence, and sundry indifferent attitudes of civil servants while in active service. Let us rise en masse and give unflinching support to the retirees of the State, and thus appreciate the service they rendered to fatherland at their active years of service. This maltreatment and miserable deaths of Imo pensioners on daily and weekly basis are clear testimonies of ingratitude from Imo government.
Prof. Protus Nathan Uzorma

President Buhari On A 2 Day Working Visit To Morroco (PHOTOS)

innonews - June 11, 2018 0
President Muhammadu Buhari is in Morroco on a two day. Here are some snapshots from the visit. PHOTO CREDIT: STATE HOUSE

innonews - July 21, 2019 0
Pensioners who have been owed several months of pensions in the State will have to undergo a fresh biometric Verification Exercise.

innonews - October 7, 2018 0
The popular Ghanaian Actress and a Singer, Juliet Ibrahim has seen with Attention Magazine Editorial Executives, as she poses with a copy of its...

innonews - May 7, 2019 0
Six top chieftains of the All Progressive Congress, APC, in Imo State are in hot race to secure a ministerial appointment in...