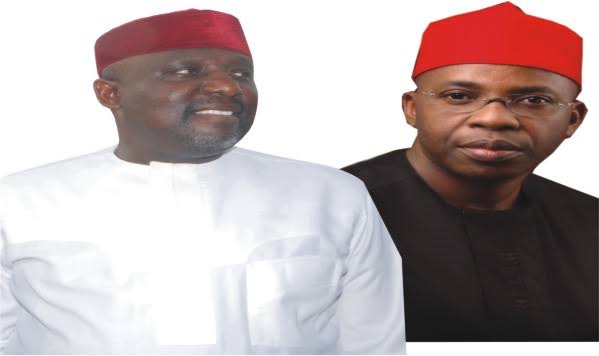 Governor Rochas Okorocha of Imo State and his predecessor, Ikedi Ohakim have sent their condolences on the death of former Vice President, Alex Ekwueme.

Ekwueme died on Sunday in a London hospital.

In a statement signed by the Chief Press Secretary to the Governor, Sam Onwuemedo, Okorocha described Ekwueme as an epitome of detribalized Nigerian.

The Statement reads  “The Governor of Imo State, Owelle Rochas Okorocha has received the sad news of Dr. Alex Ekwueme, the former Vice President of Nigeria, with great shock, describing him as an epitome of DETRIBALIZED Nigerian, and therefore died as a statesman.

“The governor remarked that nine years after the civil war, the rest of Nigerians re-enacted or reinforced their faith and belief in the Igbos as one of the major tripods of the nation through Dr. Alex Ekwueme who was elected the Vice President of the nation with Alhaji Shehu Usman Shagari as the president.

“Governor Okorocha also noted that Dr. Ekwueme launched the Igbos into national politics since the second Republic and refused to be cajoled into playing tribal politics, and until his death, Dr. Ekwueme remained in the mainstream of Nigerian politics because of his firm believe in oneness of the nation.

“According to the governor, Dr. Ekwueme was a good example of the kind of politics the Igbos should be playing at any given time and has left behind a befitting legacy.

“He said Dr. Ekwueme’s peaceful and honest dispositions both in his politics, public and private lives are all worthy of emulation.

“The only regret about Dr. Ekwueme at the moment is that he has died at a time his wealth of experience and his wise advice would have been most needed and most useful to all Nigerians of goodwill.

“The governor said Nigerians and of course, Ndi-Igbo in particular would greatly Miss Dr. Ekwueme and prays that the good LORD should grant his soul eternal rest.

“The news of the death of former Vice President, Chief Dr Alex Ekwueme, in a London hospital came to me on Monday morning. I have been in mournful mood since the news broke to me.

“It is true that no father wishes to stay alive to bury his children. It is also true that God had blessed Dr Ekwueme with long life and he achieved so much for himself, Ndigbo, Nigeria and Africa at large. And though there is no good time for dying, the former Vice President died at a time his wisdom was still very much needed.

“While the entire Igbo nation and Nigeria continue to grief over his death, I extend my condolence to his immediate family and pray God to give us the fortitude to bear this irreparable loss.

“Though his death marks the end of an era, we should realise the huge task left for the living to continue to uphold the peace, honesty, brilliance, love and unity, being virtues he was known for.

“May the soul of the departed elder statesman and multiple professional rest in peace.

Barr Emma Ogboko has expressed sadness over the death of former Vice President, Dr. Alex Ekwueme. He joined other Igbo leaders, Nigerians and Africans at large in mourning the demise of the foremost Igbo leader whom he said was the face of Ndigbo in Nigeria’s politics and epitome of unity in a diverse Nigeria.

The seasoned politician and entrepreneur who is a chieftain of the All Progressive Grand Alliance (APGA) said that the death of Dr. Ekwueme is an irreparable loss to Ndigbo, saying that he wished the former Vice President lived longer because Ndigbo and Nigerians needed his wisdom now more than ever before.

He said that the death of Ekwueme was one too many, stressing that the vacuum he left behind would be very difficult to fill at this material time.

He added that Ndigbo needed his wisdom to navigate the raging debate on restructuring and the agitation against marginalization in the Southeast.

He called on the governments of the Southeast and the Federal Government to take actions to ensure that the values and legacies Dr Ekwueme left behind live.

Messi In UK, In Talks With Man City

innonews - August 26, 2020 0
In what appears a move towards a reunion with Pep Guardiola, Jorge Messi, father of Barcelona striker, Lionel Messi, has arrived in...

innonews - April 15, 2019 0
Abuja based Comedian "Shortcut", is currently trending online as he staged the controversial APC Governor, His Excellency, Nasir El Rufai in a...

innonews - September 14, 2018 0
*BY RALPH EJIMKONYE* The Imo Awareness Coalition, a political watchdog and forecast group have predicted that three of the four or five major political parties...

innonews - April 2, 2020 0
Governor of Imo State, Senator Hope Uzodinma has approved the constitution of interim management committee in the 27 LGA of Imo...