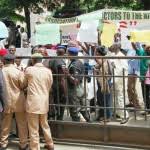 Owerri City Gate Contractors Beg For Payment of Contracts.
Contractors who constructed gates in Owerri city at the behest of the Rochas Okorocha administration has called on the Imo State Government to pay them for the contracts they carried out.
Also, businessmen who supplied materials and rendered one form of service to the State Government during the 2012 birthday anniversary celebration of Governor Okorocha called on the State government to pay them for their services.

innonews - May 23, 2021 0
A watchdog in Imo State, Imo Awareness Coalition, IAC, has advocated for an Imo Economic Development Summit in the face of rising...

innonews - April 30, 2022 0
A leading contender for Owerri Zone Senate seat on the platform of the All Progressives Congress, APC,  Prince Alex Mbata has vowed...

innonews - July 8, 2017 0
Brazil international, Dani Alves, will now join Manchester City in a matter of days. Alves is expected in Manchester at the start of next week...

How Rev.Nnamdi Akujor Of Overcomers Christian Mission Predicted The Exit Of...

innonews - February 22, 2018 0
The exit from earth of the founder of Overcomers Christian Mission, Bishop Ezeugo Ekewuba and popular United States based preacher, Billy Graham was predicted...