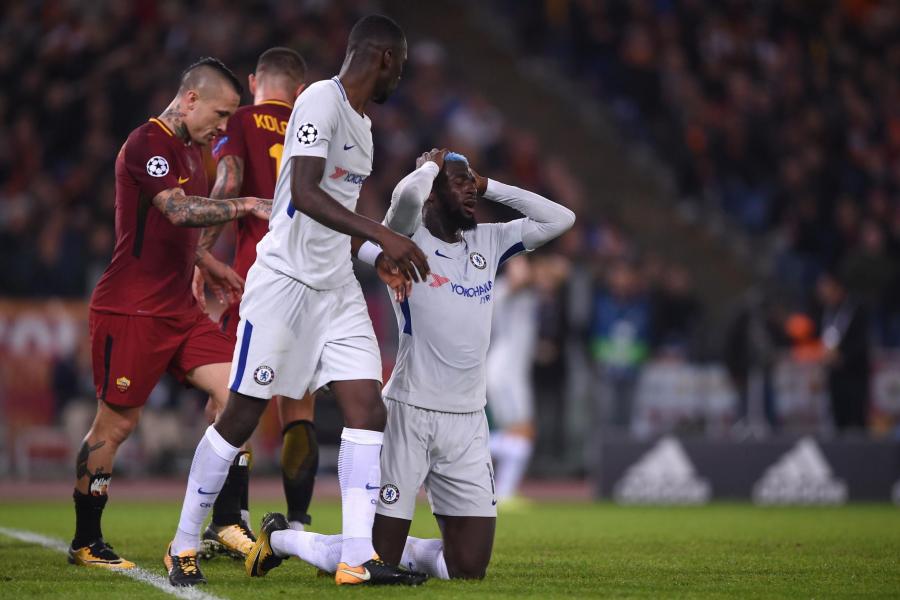 Stephan El Shaarawy scored twice to help Roma seal a 3-0 win over Chelsea at the Stadio Olimpico on Tuesday night and send the Italians top of their Champions League group.

The 25-year-old opened the scoring for the hosts in under a minute with a superb shot with the outside of his boot, before he capitalised on some poor defending from the Blues to make it 2-0 in the 36th minute.

Diego Perotti then put the game out of sight for Chelsea after finishing off a chance that had come about after Cesc Fabregas gave the ball away in the 63rd minute.

Roma could have scored more against a lacklustre Chelsea side, but their 3-0 victory means they overtake the Blues at the top of Group C – a point above Antonio Conte’s side with two games left to play.

Before the clash, Conte had emphasised just how tough of a test Roma would prove in their home stadium, particularly with the Italians having secured three 1-0 wins in Serie A following their thrilling 3-3 draw with Chelsea a fortnight ago.

But even Conte would not have predicted the strong start that Eusebio Di Francesco’s side would have on Tuesday – with Roma going 1-0 up within just a minute.

Moments after Chelsea created a chance down the other end involving Pedro, a long ball from the left fell to Edin Dzeko, whose knockdown found El Shaarawy.

The 25-year-old didn’t disappoint after receiving the ball and unleashing a first-time effort with the outside of his boot that hurtled into the back of the net to hand Roma the lead in stunning fashion.

Despite the sheer disappointment at going behind so early in the game, Eden Hazard – who scored the winner against Bournemouth at the weekend and, indeed, a brace against Roma two weeks ago – sparked Chelsea back into life.

The chances showed that Conte’s side were getting themselves slowly back into the clash, but when David Luiz’s poor touch allowed Roma to win the ball back and set up El Shaarawy, whose subsequent effort was saved by Thibaut Courtois, it was a sign of things to come.

Indeed, El Shaarawy soon got his second of the night when Radja Naiggolan’s long ball was allowed to run on by former Roma defender Antonio Rudiger and reach El Shaarawy, who finished from close range.

The Blues rallied back, with Ramses Becker saving from Marcos Alonso before Tiemoue Bakayoko’s header from a corner flew wide, but the visitors couldn’t find the all-important equaliser they wanted before the break.

Conte reacted with a change in the 54th minute as he brought off captain Gary Cahill for Willian and pushed Pedro into the right wing-back role and Cesar Azpilicueta back into defence.

Before his changes had any time to work, though, Roma were 3-0 up – with another individual error leading to the goal.

Cesc Fabregas, on his 100th Champions League appearance, carelessly gave the ball away which saw the ball worked forward to Perotti, whose shot from 25 yards out flew past Courtois.

Roma could have had two more but saw Perotti fire over the bar after some awful defending from Chelsea, in which all three of their defenders rushed to try and win the ball back from Dzeko but left the Argentine free to go for goal, before Courtois denied Kostas Manolas from close range.

innonews - January 29, 2020 0
By JANE UKONU Governor Hope Uzodinma, of Imo State has assured workers that they will receive their monthly salaries as...

innonews - October 9, 2018 0
*Ex Lawmaker Lambasts APGA Leadership* BY: Reagan Obioma In what appears a fresh political alignment towards 2019 Imo governorship contest, a governorship aspirant of the All...

innonews - October 8, 2018 0
Governor Rochas Okorocha has said the Direct Primary of the Al Progressive Congress, APC has exposed politicians who exist on social media and live...