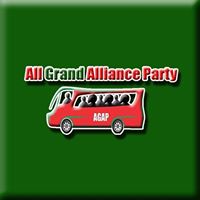 The State Chairman of All Grand Alliance Party (AGAP) Imo state, Chief Ugo C. Ugo has stated that the party will subject all governorship aspirants and other politicians running for elective positions in AGAP to undergo psychiatric test before picking tickets to nip on the bud the idea of exhibiting madness in governance.

Chief Ugo  said that those going to run for governorship positions and other positions must get a letter of good conduct as a Christian from the Catholic Arch-Bishop, Anglican Arch-Bishop and other reputable churches because the party will not allow devilish politicians in AGAP.

Speaking to some journalists recently, Chief Ugo C. Ugo who retired years back as Area postal manager Abia state, General Manager NIPOST philatelic Bureau opined that he will make AGAP a beautiful bride in Imo state because he is going subject those looking for positions to undergo both litmus and Acid test before picking tickets in AGAP.

Chief Ugo who was Head, Mail operations in Delta state as Manager Ems-Speed post at various times before rising to Area postal manager and general manager positions opined that having controlled staffers ranging from 1400 to 1800 from all parts of Nigeria, the job of chairmanship of AGAP will be easy for him. He equally stated that the experience he gathered in over thirteen countries of the world he visited while working in NIPOST will be an added of advantage to him coupled with his exposure in the media world.

Chief Ugo also said that having written so many published and unpublished books over the years, he knows how to tackle serious challenges and that he is fearless because people around him call him another Donald Trump. He averred that people looking for governorship positions must show evidence of having managed men and materials before and must have experience either in Civil service or public service to help avert impunity, recklessness and no respect for rule of law.

Chief Ugo said that he believes in the “Primus Inter Perez” meaning first amongst equals, maintained that in selection of those to go for elective positions, the party will make sure they have good education and are capable of naming at least five people who are their classmates from primary, Secondary and Tertiary Institutions they attended to avoid bringing charlatans as leaders.

Chief stated that this is the time Imo people must get it right calling  on Imolites to think, dream and join AGAP because the party is on ground and knows how to get them out of hardship, sufferings and bondage which they bought for themselves while believing that all that glitters is Gold.

He said “Imo state is passing through a stage which we created by ourselves by not looking before leaping and for a change of this mess to happen, AGAP will be the answer. Take it or leave it. AGAP’s victory to Douglas house is on the way come 2019. We are talk and do and we are not here to deceive anybody with sweet talks that will never be accomplished. Let us now change with AGAP before they kill all of us with expired drug called All Progressive Congress (APC)

innonews - June 19, 2018 0
A frontline journalist, Sir Kelechi Mejuobi is attracting the attention of Ohaji/Egbema State Constituency youths who want him to join the race for the...

innonews - July 3, 2017 0
Nigeria’s former Permanent Representative to the United Nations, Alhaji Maitama Sule is dead. He was also the National Chairman of the Northern Elders Forum...