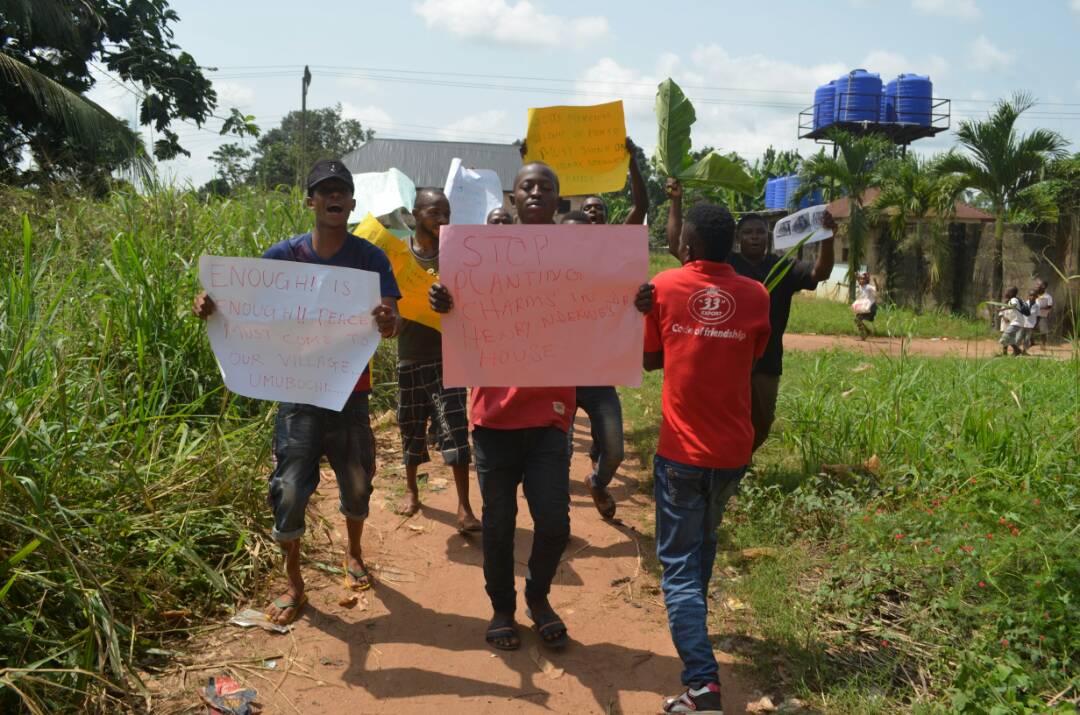 Youths under the aegis of Umubochi Awo- Omamma Youths Assembly, UAYA  penultimate week, took to the streets to show their displeasure over what they termed “the use of diabolical and fetish activities” against some enterprising personalities of the kindred by some people they described as “disgruntled elements”.

Expressing their grievances, the President of the organization, Comrade Josiah Eleoba noted that it is unfortunate that their people are not prospering in terms of development, education, employment and other forms of skill acquisitions, pointing out the only person that have the passion to look into the welfare of the youths of the area is one Dr. Henry Ndekwe.

” We are not happy over the way things are going in this village. Nothing is moving as expected and if we continue to keep quiet we all may perish. That is why we are speaking out so that those concerned should retrace and repent from their evil activities”

He called on Dr. Ndekwe to return home that they would protect him.

“The cause for this protest is about the information at our disposal that some objects suspected to be diabolical were removed from the compound of Dr. Henry Ndekwe, a medical doctor residing in the United States of America, USA”

” This is the only man that bears our interest at heart and because of some activities of some evil people which are alien to his belief, he has decided to stay away from the village. So we have to speak out because his not coming home is not in interest of the people”.

Speaking further, Izuchukwu Eluh, also noted their grievances were as a result of unnecessary rancour and acrimony, which according to him has left their people in confusion.

He warned those who go into all sorts of evil to stop others progress to desist from such acts, saying it halts development and spiritual growth of the people.

In his comment, Comrade Ambrose Onyemaobi  stressed that the essence of the protest was to let the bad people in their community to know that they are aware of their antics towards causing obstacles to the peace and development of the area, adding that if they continue to fold their hands what happened to Dr. Ndekwe will make others to desert the community.

Some of the inscriptions on the placards the angry youths read; “The evil must stop”, “Stop planting charms in Dr. Henry Ndekwe’ s house, “Dr. Ndekwe is an asset to the community, let’s stop scaring him away from us”, “Peace, Development and Progress must return in Umubochi among others.